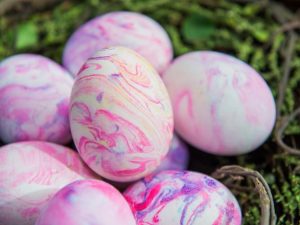 Welcome spring flowers and the Easter season. I love it in Seattle at this time of year because of all the beautiful flowers that bloom. First the tulips come out and then other flowers and trees start blooming. I have two plumb trees I can see out my windows and they are both covered with beautiful white blossoms. Pretty soon the Rhododendrons will be in full bloom and they will make my yard very pretty. They are red, pink and purple.

Today is April 10 (Palm Sunday) and the beginning of the Holy Week. Easter is one of my favorite holidays. I loved coloring Easter eggs when my children and grandchildren were young and then having Easter egg hunts in my yard. I have many good memories of that time period. Now it is time for my grandchildren to take over the celebrations.

When it is so beautiful here in Seattle it is hard to think about the people that live in the Ukraine and all of the fighting that is going on in that country. It looks like this is the last war before the end of this cycle. The Bible talks about a great war in the 19th chapter of Revelation. I had no idea before the war started that it would be in the Ukraine, although the Bible says that the king of the North comes down and attacks the king of the South. Russia is definitely north of the Ukraine and Putin sent his Russian soldiers down to attack that country. How long will this war last? Will this war spread to other countries? Is it about time for the time-lines to split? I think that might be what happens for those who are ready to live on the New Earth. Those who want to fight can stay on the old Earth.

Maybe this exodus of the people out of Ukraine is symbolic of the Moses drama when the Egyptian King threw the people out of Egypt. The people then crossed the red sea to get to safety. The Ukraine borders on the Black Sea. We are almost in the Passover season, which starts on Friday night April 15 and continues until April 23. Watch to see if anything happens during this time period. The full moon is on April 16 and is called the Pink Moon or the Paschal moon, which is the word for Passover.

Could Putin be symbolic of the Egyptian King? What will he do if he gets pushed into a corner where he can’t get out? Maybe the Chinese will come in to help him, or maybe symbolically he will be thrown into the burning pit, or die. Whenever this drama is over we move into the 21st chapter of Revelation which starts out:

“then I saw a new heaven and a new earth because the first heaven and the first earth had passed away”. Then I saw the Holy City Jerusalem (space ship) coming down out of heaven from God, prepared as a bride beautifully dressed for her husband. And I heard a loud voice from heaven saying “now the dwelling place of God is with men and he will live with them. They will be his people and God himself will be with them and be their God. The old order of things has passed away”. He who was sitting on the throne said “I am making everything new and he said to me, “I am the Alpha and the Omega. I will make everything new again”.

We are finally getting close to the end of the Bible prophecies.

How many of you know about the story of St. Mary Magdalene and the red egg? It is a very interesting story. After Jesus was crucified, Mary was the first one to see Jesus. She ran to tell the Apostles she had seen Jesus. They did not believe her until they ran to the tomb themselves. The unbelief of the Apostles steeled her for a life of ministry to many who did not believe in Christ’s Resurrection. She continued to witness to the Faith and Resurrection – and she did it with an egg. It’s one of the reasons we use Easter eggs at Eastertime. 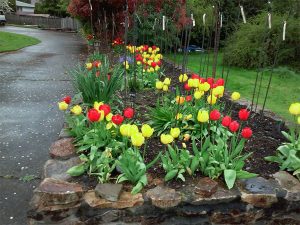 According to tradition, St. Mary Magdalene, who was a wealthy woman – gained an audience with the emperor Tiberius in Rome after Christ’s Resurrection. Denouncing Pilate for the way he conducted himself at Christ’s trial, Mary told the Emperor about Christ and his Resurrection from the Dead.  Holding out an egg too him, she proclaimed “Christ is Risen!” The emperor was not impressed. He told Mary that there was about as much chance of a human being returning to life from the dead as there was of the egg in her hand turning red. The egg promptly turned red! This is why you see so many pictures of Mary Magdalene with a red egg in her hand.

Even before the time of Christianity, eggs were a symbol of creation, spring, and rebirth. After the Resurrection of Christ, they took on deeper symbolic meaning. The sealed tomb of Christ was considered the uncracked egg. St Augustine described Christ’s Resurrection from the dead as a chick bursting from an egg. The Eastern Catholic Church to this day distributes red Easter eggs, and the tradition of sharing Easter eggs across the world stems directly from Mary Magdalene’s proclamation of Christs resurrection to the emperor and the miracle of the red egg.

Mary Magdalene also started a healing group called “The Sisterhood of the Emerald Fire,” which continues to this day. I received an article from the Internet from Rev Mary Hardy in March of 2016 talking about this healing group and about the amygdala gland and how it helps our brain.  This gland is activated by smell. Smells go into your nose and then up to your limbic system in your brain, and in my case, they shut off my brain. Smells have been a real challenge for me. My house is now free of all chemical smells.

I was chemically poisoned by the carpeting in my house many years ago and the result from that was not good. I became extremely affected by chemical smells like soap, perfume, shampoo, and anything chemical smelling like most cleaning products. A few years ago, I discovered that I could handle the natural living oils. I could smell them one at a time and it did not bother me because they are natural smells. Now I smell them every day and that good smell goes into my brain and it has changed me tremendously. This is why we hear stories in the Bible about anointing people with pure oils. By activating the amygdala gland we, as humans, can change the world and bring peace and harmony into our souls and to the planet.

I will write another article about the planets before the end of April, hopefully. I was planning on writing on what the planets were doing now but this information came out instead. I hope all of you have a wonderful Easter week and if you dye some eggs, make them really pretty. Then celebrate the risen Christ light that is within all of us and have a Happy Easter.

I can be reached at planetalert@hotmail.com or on my website at www.mahalasastrolgy.com