Today is January 6 and it is the celebration of the holiday called Epiphany. Epiphany is one of the oldest Christian feasts. It has been celebrated since the end of the second century. It is commonly known as the twelfth night. Epiphany also means awakening. How many people woke up to the Trump rally yesterday? What a day Trump picked to try to destroy our government by mob violence. It was very traumatic to see the mob go into the Capitol and try to destroy everything in their way. What a scary event. I am glad I did not see it as it occurred because I was out working in my yard.

I made an astrology chart for Washington D. C. today (Jan 6th, 2021) and it is a very interesting chart. The first thing I noticed was that the sun is on 16 degrees Capricorn (which rules governments) and number 16 is The Tower struck with lightning in the Tarot Cards. I have mentioned before that the word Trump adds up to 16 and he has many Trump Towers all over the world. I guess he picked a good day to try to destroy our government. 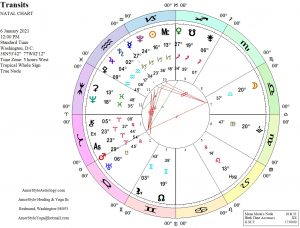 The planet Pluto (the destroyer or transformer) was in a square aspect to the Goddess Eris today (who rules chaos). Trump sure created much chaos. Eris is on the degree of “a large audience confronts the performer who disappointed their expectations because he promised more than he could deliver”. That says a mouth-full. Mercury is conjunct Pluto in Capricorn on the degree of Pilgrims climbing the steep steps leading to the shrine or Capital. That was definitely seen on TV as many people climbed the stairs to the Capital and broke in doors and climbed in windows after they broke the glass.

The sun is in the sign of Capricorn right now along with Mercury and Pluto. Saturn (Satan) rules Capricorn along with governments. I have a book called “Saturn the Old Devil”. Saturn is called the devil because it brings us the lessons we need to learn in this life-time. It is not really the devil. After you have learned your lessons Saturn brings you the rewards. We have just finished 2 ½ years of Saturn energy. Now we will be moving into the energy of Aquarius on January 20. 2021. This is inauguration day for the USA.

I know there is much chaos going on right now although I think there will be some kind of resolution by January 20. I don’t know what that solution might be although we move into the energy of Aquarius on January 20 and that energy will be here for the next 2 ½ years. Uranus rules light and that means the light has won even though it doesn’t appear that way right now.

By January 20 we will move into a very fast-paced energy. The planets are all in forward motion this month except Uranus which moves forward on January 14. Mars is getting ready to move out of Aries and then it will not be activating Eris (chaos) anymore, thank goodness. Mars will be in Taurus (ruled by Venus) until March 4. Saturn and Jupiter are in Aquarius which is a much better place for them. The conjunction of Jupiter and Saturn was considered the Star of Bethlehem. We are now in Christ Conscious Energy and it is time to tune into that energy. If you think time is going faster check out this link. Scientists say Earth is spinning faster than it has in decades

The last few days the Schumann Resonance went up to 500 Hertz and the next day it went up to 1200 hertz. That is way off the chart because the Schumann Resonance used to be stationary at 7.8 which was considered the heartbeat of the Earth. It has become stronger in the past few years. Because this energy has been so high this week it may have had something to do with Trump trying to over-throw our government.

I had a dream on December 15 of many waves of energy coming in. It was portrayed in my dream as waves of water. I was with a group of people at the beach and we watched as a large wave came in. We decided we had better move to higher ground to get away from the waves. We went higher and higher up the hill to get away from the waves. The waves just kept coming in. I think we are in the time period now of the energy waves happening because the Schumann Resonance is so high. At least in the past few days. I think today was one of those waves coming in. There are more to come.

This past year there has been a war going on between the light and the dark on earth. That is why there has been so much violence this year. It is an actual war although many people do not recognize it as a war. The war in the Galaxy between the light and dark space ships ended in December of 2019. Then we went into a full-fledged war on earth. The earth is the last planet to experience this war and when this war is over our whole galaxy will be free of war. Then the earth can again become a great Garden of Eden.

This war has played out as all of the violence and demonstrations we experienced in 2020. The violence against our rulers had to happen so people could wake up to what is going on in the world. Because the USA is called The Holy Land we had to have this violence so people would wake up. We are Jer(USA)lem the Holy City. I believe this is the last violent event to happen if we can take the power away from Trump. If not, there will be more violence.

On January 20, 2021 we move into the energy of Aquarius, ruled by Uranus, the planet of light. What do we want to create in this new energy of light? Saturn energy brought us darkness so we could look at our shadow. Now it is time to create with the light. We elected Trump as our president in 2016 because he had his Saturn in a square aspect to Eris, which rules chaos. We needed to live through the chaos so we could see our dark side and release that energy. Our country has been divided for a long time so we could fight the battle between the light and the dark which we did in the time period of the Trump rule. In fact, the USA was split almost equally, half for Trump and half for Justice. United you stand and divided you fall. This is exactly what happened today as the mob tried to destroy our government. Hopefully this is the end of mob rule.

The energy of Aquarius is very revolutionary and who knows what will happen next. We have seen enough violence this year to last a lifetime. I am hoping that many people have looked at their shadow and let the past go so we can move into the new energy peacefully from now on.

I think Joe Biden is a nice person and if we give him and Kamala a chance we can start creating a new world of wonder. In Joe Biden’s chart his sun is conjunct Venus and he has Sagittarius rising, the sign of freedom.

I send you love so we can heal our country. It is needed! Love heals everything. It is the magic we need to change the world.

The yellow star and a galactic communicator from the Pleiades star system.

I can be reached at planetalert@hotmail.com and donations are greatly appreciated. Thank you in advance.

World Leaders Express Shock at Storming of US Capitol