Saturn moved into Aquarius 17th December 2020 accompanied by the Moon, ending his eventful 2.5 year journey in Capricorn. Capricorn is an alchemical sign and it can either be heavy as lead or transformed into gold.

Although, above, I have referred to Saturn as a ‘he’, in the Qabalah she is Binah the Great Mother in the deeper astrological teachings. She forms or holds the spiritual of energy of Neptune (Chokmah) beginning the descent of Spirit into Matter. This Great Mother Saturn also entered 0 Aquarius at Beltane 2020 along with Pallas Athena and then both retrograded back into Capricorn again to finish off what they started – the breakdown of old forms to make way for the new.

As Saturn enters Aquarius, an Air sign we may actually have a more visceral feeling of lightness. Pallas entered Aquarius on the 7th December ahead of Saturn and as emphasized before this is very important as a marker for the shape of things to come. She acts as a whole marker for the Age of Aquarius as she leads the cavalry out of Capricorn.

Pallas Athena in Aquarius brings equality and the courage of the Divine Feminine to the fore. Pallas, and her counterpart Minerva who is also a named asteroid, are also Goddesses of Wisdom, Healing and Natural Law.

The Saturn Jupiter conjunction aka Star of Bethlehem will take place at 0 Aquarius at the Winter Solstice at this key point in the Zodiac/i Ching where the light begins to return in the Northern Hemisphere. The exact sphere is Gene Key 60 whose Gift is ‘Realism’ and Siddhi ‘Divine Justice’. In the writings of Richard Rudd on this Gene Key he perfectly describes the urge for expansion which Jupiter brings, and the constriction and realism of Saturn. One way this could manifest is as disappointment and the realization that we may well be using a limited type of form or vehicle for what we want to achieve. Many systems are now so heavily laden down with rules and regulations, and have shown themselves to be unable to respond creatively or with compassion in this pandemic. Other communities, systems and structures have really risen to the challenge. This is a time where we will be challenged through these disappointments to get out of our beliefs in our heads and dive into the heart of love that will heal all divisions.

One of the cosmic themes I perceived a while back is the reclaiming and healing of Indigenous Wisdom globally in this time ahead. The Sixth Sun films are a living tribute and preparation for this time of wider transformation. This morning I heard that the new Interior Minister for America will be the first Native American to hold this position. Environmental Justice is such a key issue in the world right now so this is perfect. Here is the quote from the Washington Post that popped up on my computer whilst writing this:

With that selection and others this week, Biden sent a clear message that top officials charged with confronting the nation’s environmental problems will have a shared experience with the Americans who have disproportionately been affected by toxic air and polluted land.” Washington Post, 18th December

I did a card reading asking for information about the Star of Bethlehem with the Sibyl’s Oraculum: Oracle of the Black Doves of Africa by Tayannah Lee McQuillar and artwork by Katelan V.Fosy. I chose these cards because they evoke an ancient order of Astrologer Priestesses from Libya Africa, and both Pallas and her Mother Metis were originally of Libyan origin. Libya was in that time a much larger area than it is today.

Archaeological research and modern astronomical programs show the Sybil’s Oracular temple to be a highly advanced civilization at the oasis Siva in the desert Findings have been verified by the relevant authorities showing whoever built the temple were aware of algebra and geometry long before the Greeks…just pause to take in the implications of that!

The Greek’s saw Siwa as only second in importance to Delphi at Mount Olympus and appropriated the knowledge as their own. The Black Doves are a reference to the Pleiades, which means ‘a flock of doves’. Look out for them because a flock did a few fly byes over my head yesterday as if to say ‘yes’.

The downfall of Siwa (and similar spiritual practices globally) came after thousands of years of active use and influence when the Council of Nicene denounced both astrologers and oracles as evil – ironically forgetting that the Magi and the birth of Christ are inextricably linked to Star Lore. This is the same council who also removed all the books from the bible which showed women in a favorable light.

As these Oracle cards call forth the wisdom of the original, powerful Libyan Pallas Athena I was curious to see what they would reveal. Each of us may see different things in these images, so what do they speak of to you? It feels that the act of using our oracular powers inherent in our human DNA is so important, learning to trust our best navigation tool in these times of chaos, our intuition. 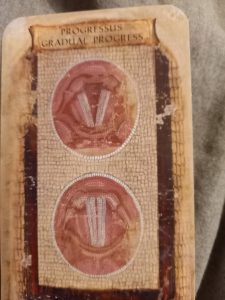 The card chosen for the Past is ‘Progressus’ or Gradual Progression. All the images are mosaics evocative of these ancient cultures. This card is all the about the opening of the throat. This is one way in which the Pallas Athena archetype becomes embodied, through the courage to speak about that which has been silenced. Perhaps it also relates to singing? 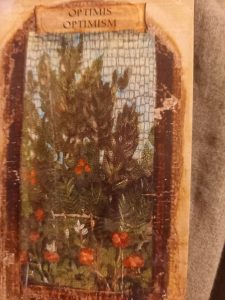 This card chosen for the Present is ‘Optimis’ or Optimism. According the narrative ‘Optimism is a flag-bearer that rides ahead an army of victorious thoughts.’ That is just how I see Pallas riding first into Aquarius. The image contains all kinds of rich plant life such as cypress, ferns and orange trees symbolizing abundance and bliss. I love this because in my heart I too feel optimistic about the future. 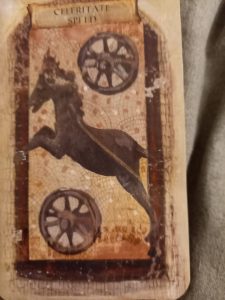 The final card in this reading representing the Future is ‘Celeritate’ or Speed. This card symbolized by the Horse is all about taking action and it so much embodies Pallas Athena. It also refers to ‘Turms’ the Etruscan god of trade and this could refer to all the new currency and type of commercial changes taking place globally. The chariot wheels speak to me of the cyclical nature of things and of new forms arriving. Also, of Divine Justice – when people are truly sorry for what they have done or for what was done in their name then the karma can be transmuted through Grace very quickly.

Here is the final bit of advice from the card which I love. “The time of pondering what is to be done has passed It is time to act on what you know.”

Beginning Imbolc 2021 I will be starting a course teaching Basic Astrology in the Lineage of the Great Goddess Mystery schools such as the Sibyl’s. An Intermediate course will follow around Beltane 2021 focusing on a deep understanding of the geometry of aspects. If you love astrology but struggle with what’s going on in the chart, then this is a great opportunity for an in-person teacher led course. This course is also perfect if you feel drawn to the Oracular Goddess Tradition which is a very specific lineage that I embody. Anyone can join in because it will be on zoom. If you would like the fuller information please email me at astroalison@gmail.com

I also offer one to one readings, so again if you are interested in further information please get in touch.

Happy Winter Solstice and Warm Blessings to you all. Thank you for reading my writings and musings, its greatly appreciated. Thank you also to Mahala and Dave for publishing them.