My article is late this month because I just did not feel like writing. Then, I received an email that explained how I had been feeling. Here is a link to that article Mary Long. Isn’t it amazing that so many of us feel the same way at the same time? Guess that is what is called Unity Consciousness. We have now made it through the Solar Plexus gateway and I feel much better.

The Solar Plexus initiation started for me on October 25, 2019 and ended on Halloween, or on All Souls Day. My gut was upset for days and I did not feel like eating. I had to concentrate on releasing some really old stuff that had settled in my Solar Plexus. Did you feel that energy? I know I really experienced an emotional week. The third chakra is where we hold our emotions and our traumas. This is why so many people have a belly on them that they cannot seem to get rid of. This is because they are holding too much old stuff in their third chakra. When someone says something that hurts you do you feel like you have been hit in the gut? I know that is how I feel. This past initiation was not only about emotions, it was about the release of our old fear-based emotions. Have you released all you need to release so you are ready for the new energy that is now in effect?

We have major transformation in front of us and we need to be balanced so we will be able to move through this upcoming energy in a peaceful way. In January there will be a major line-up of planets in Capricorn. On the full moon of January 10, 2020 there will be 5 planets plus 2 dwarf planets and the moon’s south node all in Capricorn with the moon opposing those planets. The main aspect of that line-up is the Saturn/Pluto conjunction on 22 degrees Capricorn. This aspect indicates the ending of one cycle and the beginning of something new. This aspect is in Capricorn which is an earth sign and rules governments and structures. This aspect may affect governments in the world that need to change. It will also activate more earth changes. There will be much chaos at this time because the Saturn/Pluto aspect will square Eris, the Goddess of chaos.

Then on February 20 there will be another alignment of planets in Capricorn. At this time there will be 6 planets plus 2 dwarf planets and the moon’s south node. This alignment has one more planet in it than the January one has and that planet is Mars, which rules action. The sun will be in Pisces at that time which is the last sign of the 12 signs of the zodiac. Here is another article by Michael Love. 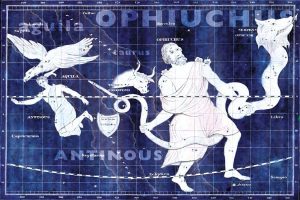 There is also a hidden 13th  sign of the zodiac called Asclepius, or Ophiuchus. The sign of Asclepius was just honored by the acknowledgement of Hygiea, the daughter of Asclepius on Halloween. I received an article talking about Hygiea that shows images of that dwarf planet. Thanks to these images Hygiea may be reclassified as a dwarf planet. She is the smallest dwarf planet in our Solar System. Link to article on Hygiea – ESO Telescope Reveals What Could Be The Smallest Dwarf Planet Yet In The Solar System.

Asclepius, or Spider Women, is honored by the Hopis as their Creator Goddess. One of the symbols for Halloween is the spider and that is why her daughter was acknowledged on Halloween. When I was trying to figure out how to put Asclepius in a regular Astrology chart, I decided to put Asclepius in the middle of the chart because her web spins around all of the signs. She is in charge of the zodiac. She is the cog in the middle that holds the wheel together.

People have thought that Asclepius is male although through my studies I found out that she is female. She is considered our Creator Goddess and rules the 13 signs of the zodiac. Asclepius is first seen in the heavens on Halloween as the image of a woman who has her foot on the elliptic. The second time is when the Sun moves through the sign of Asclepius between November 30 and December 16 and she steps on the other foot.

A solar wind is sent to earth between November 30 and December 16. This is the only sign in the zodiac that sends wind to Earth. Asclepius is our hidden Goddess and her daughter Hygiea was a wonderful healer. There are statues of Hygiea in Greece where the Asclepius healing temple was located. Asclepius has the symbol of the snake. Actually, it is the double snake which is called the Caduceus and that is still the symbol of doctors to this day. The double snake represents our kundalini that runs up and down our spine.

The cycle that changed on July 11, 1991 was that the star Regulus “The Royal Star of the Lion” moved into the sign of Virgo. Regulus is now in the sign of the Goddess. Regulus had been going through the sign of Leo for 2,160 years. That was the age of Kings, queens and royalty. It was the time when kings and Queens ruled. Leo rules the heart or love. Jesus came in during the beginning of this time period to teach people about love. We are just now at the end of that age and are finally learning how to think with our heart. In December of 2012 some of us started to feel the energy of our hearts and moved into the energy of 5D. Now we have the ability to move into 6D which is the energy of magic, miracles, and creating what we choose to experience.

There are cycles within cycles and some of the cycles have remained a secret. This Halloween some of us finished the Solar plexus initiation and moved into our hearts. Now it is definitely time to manifest heart energy. By the end of next year, we will be totally in the Year of the Goddess. Isn’t that exciting? The Goddess energy is one of love in the hearts of both men and women. It is time to “THINK WITH YOUR HEART”.

A big Thank You to those of you who donated last month to help me pay our medical co-payments and teeth challenges. This past year has been something else as far as challenges to my health and my husband’s health. Thank goodness we are both doing fine. I really appreciate having my energy back again. Bless all of you earth angels. I can be reached at planetalert@hotmail.com  Thank you! Thank you! Thank you!