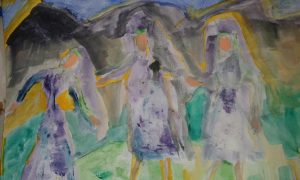 During the unfolding cosmic events since the solstice I have been exploring Genesis and in depth translations from Aramaic in Desert Wisdom: The Middle Eastern Tradition – from the Goddess to the Sufis by Neil Douglas-Klotz, which have illuminated the new creation energies anchoring into planet earth and all her life forms right now.

The Jupiter Neptune square at Summer Solstice was exact at 18 degrees, with Jupiter between the Galactic Center and the Galactic Activator. I was able to see in the expanded version of Genesis below from Desert Wisdom the process at play.

The First Day; An expanded translation of Genesis 1.5

KJV: And God called the light Day, and the darkness called Night. And the evening and the morning were the first day.

“To further engrave their character
So that the story might continue,
The Universe Being compressed the fate of Light and Dark
Into two gatherings:

The first, (Galactic Attractor?)
a mass of definite luminous manifestation and intelligence-
A fireball of straight rays of all spectrums
Moving with purpose-
Formed the quality of Primordial Day

The second, (Galactic Centre?)
A mass of indefinite, endarkened manifestation and unknowing-
Circular energies moving out and back from the centre-
Formed the quality of Primordial Night.

Once over and back again,
Forever after entwined,
This first round of closing and opening,
Congealing and expanding,
Off and on,
Also marked the beginning of
A different sense of universe time.
(There were no seconds, minutes or years,
But this we know:)
It was the first period of
manifest luminous phenomena
In our Cosmos-
The First Universal day.”

Those of you who have followed my work will know I have been writing for a few years about the importance of Hygeia who I have found deeply connected to Circadian Rhythms – the way the human body is constructed around billions of biological clocks that respond to light, dark along with other triggers such as age. Combined with Astraea who has been conjunct Hyegiea for around 2 years, we have the creative impulse entwined with cosmic rhythms encoding humanity with higher frequency DNA – God’s big beautiful clock is ticking!

My journey into Genesis deepened further at the total solar eclipse on 2nd July at 11 degrees Cancer, in a close alignment with Sirius, the star system that transmits geometrical archetypes from the 6th dimension to Earth. On that day late at night I was travelling and listening to BBC Radio 4 when I heard an interview with a female Dutch Astro-Physicist Ewine van Dishoeck who has just received a prestigious award for her discovery in deep space of water molecules in gaseous form. I was covered in goosebumps hearing this because I had literally just been reading how in Genesis it talks about the earth being created twice.

The Essence of Seed – Day Three – An expanded version of Genesis 1:9-13

KJV: And God said, let the waters under the heaven be gathered together unto one place, and let the dry land appear: and it was so. And God called the dry land Earth; and the gathering together of the waters he called Seas; and God saw that it was good.

“In the following rounds of expression of the Universe’s luminous intelligence – that is, the Primordial days, the scene of the action remains in our vicinity, the earth. Archetypes and tendencies that were brought into being first in principle now become embodied in form and action. This explains why the Earth is seemingly created twice, once in Genesis 1.1 and now here in verse 10. Yet every action in and on the earth affected the unfolding of the story of the whole cosmos. To reflect this shift in the plot, the language of our story also becomes less ethereal and shifts into a narrative prose.

Next, part of the Flow that was of a lower vibration than the primordial atmosphere began to settle and find its own level, driven forward by the purpose of the whole Universe. The Flow settled towards a way of being that was no longer unbounded and unpredictable but that now could maintain its own integrity over time. Its previous state of ecstasy became a new station of embodied action and character. Using this settled flow as a basis, the Cosmos individuated a sense of Inner Fire (iabasha), an inflamed, warm burning from within.

This further differentiation created the embodied characters of what we call Earth (arena) – a radiant energy that finds a fixed limit, a definite end in mass and substance – as well as that of sea (iammim) – the energizing into form of Flow “squared” or compressed into itself. The great waters of earth reflect the great flow of the Cosmos and its great question: “What happens next?” By this development, the archetypes of “land” and “sea” were initiated here. Their character was launched, no matter what their personality might evolve to be (that is, what stuff composed them) The Universe recognized that this was a timely and ripe way to proceed with the unfoldment of its destiny. From Desert Wisdom: The Middle Eastern Tradition- from the Goddess to the Sufis by Neil Douglas-Klotz.

So my feeling is, what is being communicated to us is that this is another moment in time the Universe recognizes it is a timely and ripe way to proceed. It is a Re-Genesis event. In the days that followed I had a powerful experience that the pristine water codes of heaven were downloading through our human blood and into the Earth’s crystal core. She too has her own Circadian Rhythms. This was experienced most strongly by the Avatar of people across the globe who are working so hard in the web of life – if you are reading this you are certainly one of them! Also as often happens with these ‘downloads’ there may be health problems experienced. It may not be for everyone, but I’m finding drinking Kefir everyday made from the creamiest milk available (Jersey cows in my case) is providing a lot of benefits. Kefir, along with Kombucha and Sour Dough Bread are second dimensional ‘beings’ through which much good energy can be literally taken into our body. Its interesting there is an explosion of people wanting these foods in Britain right now, and especially if made in a conscious way can be super charged spiritual food.

What was also communicated was the importance of nurturing the ‘seed self’.

The next passage that follows in Desert Wisdom and Genesis is this:

“At this point, the tendency of the Universe toward interiority called into possibility the primordial possibility of seed -cell -a being th`t unfolds continuously from a centre within it. Seed came with sprouts, like centre with circumference. Some of these “children” followed directly in the path of their ancestors. They stayed within the boundaries of what had been done before. Others diverged from the limits of previous expectations. Spontaneously they tried out new scenarios based on their own self-organisation. Some offered material growing substance (‘hetz) to the senses of other beings by gathering and assembling elements into fruit. All primordial seeds bore progeny of themselves and did not mix their interior essence with other types.

By establishing the habit of seed, the Universe accelerated the possibility for growth to happen. In all places where such experimentation could proceed, beings with their own interior seed of self began to take shape. In fact, in a mysterious way, they had already taken shape. With this new activity of the Universe, they now recognized themselves as part of a pattern that led somewhere. They participated in the action of the Cosmos as a whole in shaping the next part of the story. In this way the future again called to the past.

The Universe acknowledged that this was a timely and ripe way to proceed for the moment with the unfoldment of destiny.

Once over and back again, opening and closing, this marked the third aeon of intelligent action. In the Cosmos.

What is fascinating about all of this is that it accords perfectly with the Mayan Teachings. According to Stephanie South we are coming to the completion of a 7th gateway of Sirian intelligence working with planet earth. This is also what is referred to as the opening of the Seventh Seal in Revelations – it should be said though that these things happen over sometimes very long periods of time so we must be patience and have faith in their unfolding. All our work here as human being individually and in groups has enabled this to happen, we are truly co-creators with the Great One, the Creator of all. The Mayans also talk about this gateway opening to the Violet Ray which I wrote about in my last blog.

The next Partial Lunar Eclipse is on the 16th July and again across the Capricorn Cancer axis of earth and water and conjunct the Pluto, South Node and Saturn, so get ready for more ancestral healing. We are literally cleansing our bloodlines, creating sacred space in our bodies for the new to be born.