I am writing this article at the time of the Solar Eclipse on August 11, 2018. The major event connected with this eclipse is the fact that the sun and moon are both on 18 degrees Leo. This is the degree of Christ Consciousness. This is the time we have been waiting for and it has taken us 19 years to reach this point.  Let’s take advantage of this degree and open our hearts and let love flow through us. We just walked through the Lion’s Gate and who knows what is now ahead of us. We have entered the unknown.

We are in the time period where the Bible says “two people will be in the field, one will be taken and one will be left.”   This sounds to me like there will be a separation between people who are on different frequencies. Maybe we will just wake up one day in a different reality and start living on the New Earth. It’s like turning to a different station on the TV. We have been watching one station for a long time and all of a sudden we change stations. The frequency of the higher reality is heart centered energy. It doesn’t matter what you believe as long as you manifest heart energy.

The information about the separation is in the 24th chapter of Matthew. If you read that chapter I am sure you will find it very interesting because it talks about what we are going through right now. The Holy Land spoken of in that chapter is the United States because we became the ruler of the world. It says in that chapter that we will see the sign of the son of man in the heavens and he will come in the clouds of heaven with power and great glory.  Have you seen any UFOs lately?  There has been a war in the heavens between the light and the dark ships for a long time. The light ones do not fight. They just put up their shields and the negative energy goes back to the dark ship. The light has won and we will soon see beautiful light ships in our heavens.

There are different types of beings in the ships although I think the majority look just like us. We were created by ETs that look like us who are called the Anunnaki. Enki and Enlil were two brothers who came to Earth and the Old Testament in the Bible is the story about what happened at that time. Enlil is called Jehovah and Enki is called Yahweh. Jehovah was a fierce fighting god and Enki was the one who wanted to help his people because Enki and his sister Ninhursag were the ones who created us. Actually it was a group of people called the Elohim. Ninhursag was the one in charge. The Elohim were creator Goddess.

Most of the Anunnaki left Earth when a nuclear war happened although there were a few who stayed here. Scientists have found evidence of this war in the Middle East.  Babaji was one of the ones who stayed here and he was the son of Enki. If you are not familiar with Babaji look up the information on the Internet. He is one of the masters living in the Himalayan Mountains who has been here for thousands of years. It is my understanding that he was the teacher of Jesus and Mary Magdalene. If you are interested in more information about the creation story read “The 12th planet by Zecharia Sitchin”.

I recently had a dream that there was a major celebration happening and we were preparing for it by decorating for Christmas. Everyone in my dream was very happy. I woke up happy. Now this was just a dream but I think we are close to a major change. We are at a turning point right now with this eclipse being on the degree of Christ Consciousness. I believe we will see many changes between this eclipse and the fall Equinox, which is on September 22, 2018. The major festival of Sukkoth (harvest festival) starts on the full moon of September 24 this year. That is considered a very special holiday. It would be nice if this was the holiday in my dream instead of Christmas. Maybe my Christian upbringing had something to do with creating Christmas in my dream. Anyway, there is a celebration coming soon.

Now, what are the planets doing between now and the Fall Equinox? For the past five days I have been very electrical and have had bolts of electricity running through my body. This has not been fun. Has anyone else experienced that energy? We start feeling a solar eclipse for about a week before it happens. This eclipse has the dark moon Lilith exactly on top of Uranus (the electrical planet) on two degrees Taurus in a square to Mars in Aquarius, which is ruled by Uranus. I looked at that aspect and said to myself “no wonder I have been so electrical for the past few days.” 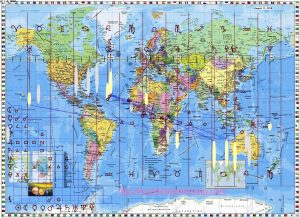 The Uranus/Mars aspect is also making a trine to Saturn on three degrees Capricorn.  Because Lilith was conjunct Uranus at the time of this eclipse she is giving Uranus the power to change things in the government of the United States.  Because this energy also tunes into Jupiter in Scorpio, more scandals have come to light in our government. A few days ago Rep Chris Collins was accused of being an inside trader and is now in big trouble. Jupiter in Scorpio is bringing issues from the past out into the light for everyone to see.  Mercury is also helping Uranus  bring up old issues by being retrograde. Mercury turns direct on August 19. The planets do not really turn backward in the heavens; it just appears that way to the people on Earth.

Right now there are six planets retrograde and when they are that way it is like they are spinning their wheels and going nowhere. Jupiter and Venus are considered good planets and they are not retrograde right now. This means that we are having help from those planets. Mars will move into Capricorn on August 13 and stay in that sign until September 10.  This eclipse will give Mars a lot of energy to change things in our government. Mars is the planet of action. It says “Let’s get things done”. Uranus just turned retrograde in Taurus on 8 8 8 the Lions Gate (August 8 2018). Isn’t that interesting? Maybe Uranus was holding the light for us to go through that doorway.

Now Saturn, Mars and Pluto are all in Capricorn and in aspect by declination. These are considered the three challenging planets and being they are all in Capricorn we will see much activity in our governments. From now until mid-September the Asteroid that causes chaos will be in a square to Vesta, the powerful fire goddess. This goddess says it is time to get things done so let’s work with Mars, Saturn, and Pluto to bring about a lot of changes

Vesta is in the fire sign Sagittarius and look at all the fires that are burning in California and around the world right now. There are also a lot of volcanoes that are erupting and shooting out fire. Sagittarius also rules judges, trials and lawsuits. Here in the United States we are going through some very powerful court trials right now which will change our government. Do we really need people to control us? Isn’t it time to jump out of the Matrix and become free?

Be ready for anything to happen. We could be living in a higher reality tomorrow or before the end of 2018. Who knows exactly what will happen? It is time to stand in your own power, manifest love and light and shine your light for all to see. Live in Unity Consciousness.  We are at the time of the end and the new beginning. The time is now!   So Be It.