As the longest Total Lunar Eclipse for a Century covered our whole Earth on the cusp of Red Cosmic Moon Galactic Year beginning, it took humanity into the heart of our origins. I had a literal ‘Return to Eden’ in this period visiting the River Eden, which runs South to North, in the North of England. Far more than that a somatic body return to a point of conception and the opening of the Holographic universe at a much deeper level than I had previously experienced occurred. Inner and outer Eden met in perfect precision in the Womb of Gaia.

The Partial Solar Eclipse on the 11th August takes place in Leo and it has strong energetic connections to the annual Lion’s Gate opening and the rising of Sirius. The Sphinx is a representation of a sacred astrological axis of the Lion Leo and the Human Aquarius.  This theme of individual creativity balanced with Collective service has been an unfolding theme for the past few years with many of the eclipses falling on this axis.

The eclipse is conjunct Pallas Athena and Mercury suggesting that confident communication and assertiveness is important right now. We have seen another wave of strong women rising to meet political challenges in the USA, Britain and elsewhere and I saw on Facebook an awesome performance by a very ‘Pallas Athena’ woman from Americas Got Talent who went viral. All good stuff showing shifts taking place in mainstream consciousness. Our mantra for communication should be ‘how can we synthesize instead of polarize?’. 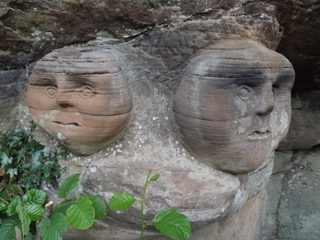 The eclipse is opposing Mars making its closest approach to Earth. In my last blog I posted a poem about The Red Troubadour. As I climbed a narrow path of the ‘folding and furling’ red sandstone bank of River Eden, where ancient Guardian faces had been carved, perhaps thousands of years ago, I experienced being inside the Red Cape of Mother Earth and her being the Red Troubadour. At night then as the Blood Moon eclipse drew closer and Mars shone like a ruby on the horizon, I had the intense feeling that we are in the ‘Rubedo’ phase of alchemical transformation.

Rubedo means ‘conjunction’ and the Red Phoenix. This red phase of alchemy begins with the Alchemical Wedding of the Sun and the Moon which is an eclipse. On their wedding night the vessel is heated to increase their passion and the two become one in the fires of love. As fixed Philosophic Sulphur and volatile Philosophic Mercury unite, matter dries completely and becomes a bright, red powder. Within this intense fire of passion, they conceive their child The Philosophers Stone. We all have within us a Philosopher’s Stone which is the perfect fractal of self-revealed by astrology.

Along the River Eden is also a wonderful stone circle called Long Meg and her Daughters. At this stone circle we witnessed a Mother Buzzard teaching her two fledglings to fly. Their cries were incredible and finally one flapping its wings wildly managed to rise above us. That night I dreamt of a Rite of Passage between a Mother and her Daughter. This felt very right for the times because a lot has been coming through the Goddess Asteroids about the importance of Rites of Passage and the sacred relationship with our parents. I am aware for some this is a difficult place, but in my experience it also possible to do Rites of Passage as an adult to rebalance childhood and adolescent issues. For some ten years I was part of a clan that practiced The Four Shields tradition which was birthed in the USA by Meredith Little (link below). We always have a Cosmic Mother and Father we can connect to if our own parenting had gaps.

Eden is a place within our DNA which was created at the time of our conception in a supernova of energy as the sperm of your Father entered the Ovum of your Mother. I was therefore delighted to see that the Holy Grail Goddess Asteroids Astraea and Hygeia along with Chiron are in Aries in the 6th house of the body for this final eclipse on the 11th August. What does it feel like when the Holy Grail opens inside you?  Its feels Holographic in nature and that you are continuously being deeply fed and nurtured by spirit. I have found also the ritual of Holy Communion taken regularly in great awareness of being ‘One Body’ with all other living beings a powerful and beautiful way to open this part of ourselves up.

Ceres is in Virgo at the moment exactly 30 degrees away from the eclipse and so this takes us very powerfully into the primal issue of food. Synchronicities with the ‘Bread and Loaves’ are continuing and it feels that to contemplate this story is to open up a great mystery of abundance. What is interesting about this story is that the following day after feeding 5 thousand people, the crowds were asking for another miracle to prove they should follow Jesus. It sounds like people haven’t changed much in 2000 years. Many people are starving spiritually and yet the answer is just a thought, a feeling away all the time. Stop focusing on material wealth and focus on human relationships and service and it will all come good. My prayer is that this eclipse will bring people a much-needed sip from the Holy Grail of spiritual nurturance. Ceres is forming a Grand Trine in Earth with Juno Goddess of Sacred Relationships in Taurus the sensual sign of love, and Pluto in Capricorn bringing in the powerful Phoenix energy of rebirth.

For Red Cosmic Moon year, I’m going to offer ‘Rites of Passage’ readings and ceremony to people in person in the North of England or through internet/cd communication overseas. This can be done alone or with a parent or child.  The process of ‘initiation’ is triggered in our body clock around age 9 years and a Rite of Passage can take place any time after this. The process will differ for each person depending on the issues. Please email me at astroalison@gmail.com for more information. I continue to offer my usual readings by CD.

If you missed The Red Troubadour here she is again https://youtu.be/HA29dAIytrA