In Part I of this post, I looked at the astrological aspects that will be playing out come the Partial Solar Eclipse on August 11th 2018. In this post, I’m going to look at where these influences will have the greatest impact.

Now, who gets to see this show? This is where Mahala’s map comes to play. 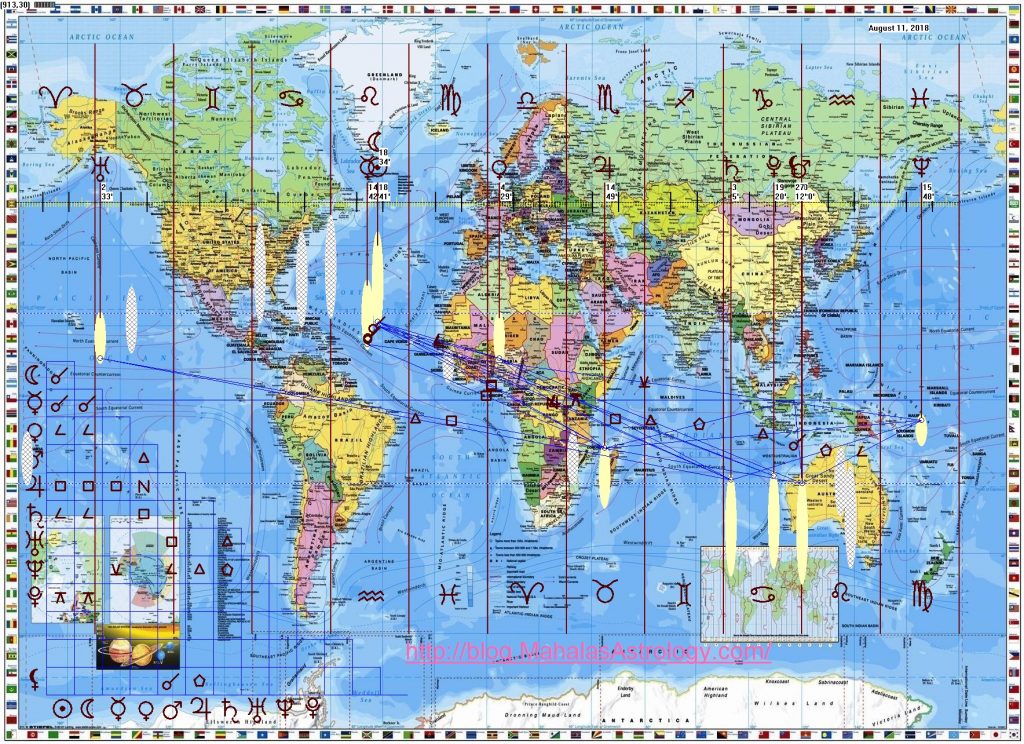 As you can see, the main eclipse conjunction has the front side centered mid-Atlantic. The longitudinal lines extend all the way down through eastern Brazil in the Rio de Janerio area on the south side. The opposite location aligns with north central Australia and extends up through Papua Indonesia and up into Japan just south of Tokyo. Look for these areas to know what needs to be done and they act accordingly. A major news article or report (since we’re dealing with Mercury) may come out in these areas that shows progress towards a solution.

The square from Jupiter starts from western Madagascar up through Somalia, Yemen, directly over Riyadh Saudi Arabia, nearly over Baghdad Iraq, through western Iran, Armenia, Georgia, and straight up to just east of Moscow Russia. This is an area where there will be an abundance of stubborn energy that is going to fight or die trying. Yet we know that it’s all words, intellectual (Mercury in Eclipse).

The Quincunx from Pluto starts just off the coast of Australia runs up just west of Jakarta to skirt eastern Vietnam to extend into China west of Hong Kong ending in eastern Mongolia or now-where-ville central Russia. The opposite echo starts around New York runs down through Haiti into Colombia and all the way down the west coast of South America. Pluto is going to drive people along these lines to get the deeper meaning of the program and to look within to see what is hidden. The show might be obvious to these people and they probably won’t stand for it.

The Sesquiquadrate form Saturn starts just west of Australia and extends north along the Bangladesh and Burma boarder continuing into central China and western Mongolia. The opposite side runs from Costa Rica to Nicaragua, Honduras to Alabama to Michigan in the United States. These are areas we should find more restricted. Expect more regulation along this line.

The Quincunx with Neptune is centered eastern Solomon Islands extending down into southern New Zealand north to eastern Russia. The opposite location is centered west central Africa: Sierra Leone, Guinea, Guinea-Bissau, The Gambia, Senegal and continues up the west coast to eventually end up in eastern Iceland. The energy here may lead people to feel like they are watching a bad dream. It may trigger the need to escape.

Now Venus. It’s trine Mars and Square Saturn. Venus is centered over Nigeria and Niger and extends northward through eastern Algeria up through eastern France to Belgium and the Netherlands. As mentioned above, the mars energy will most likely bring out a love it or hate it dichotomy with the people along this line and then Saturn will bring in dissident energy to make it so that anyone that is soft will feel damaged by the rough, abrasive energy.

The alignment of Mars starts in western Australia and extends up through Indonesia along the west coast of the Philippines, just along Taiwan and continues along the east cost of China, just east of Beijing and up into Siberian Russia. The Opposite location is off the east coast of the US and extends down into Guyana, Central Brazil, Paraguay and north eastern Argentina. Mars is going to stir the fire in these areas particularly with regards to issues from the past that will come up again. But the fire is with Venus so it may be a bit more passionate.

Finally, we get an electric Uranus. The frontal side is safely out in the pacific. The opposite echo is directly over Mazambique, Zimbabwe, Tanzania and extends north through Uganda, Sudan, Eastern Egypt, Israel, Turkey, Ukraine to just west of Moscow. This is where the Uranian energy of rebellion and revolution might be triggered. Since Saturn is mixed in the equation, expect the energy to be directed towards, or from, ruling institutions.

With all that being said, how long might we expect this to last? Anything born during this timeframe will carry this energy as it’s birth chart. This will include any treaty signed, any company formed, any product launch, etc.

Now, we watch to see what happens.

I am still offering a One Year Subscription to the Mahala’s Astrology Community at a discounted price. When you buy in, you get put on the list to receive a number of reports based on your birth time and location. Think of it this way, for cheaper than the price of a standard personal astrology reading, you get a bunch of readings from a collection of well-known author astrologers. Keep in mind that the intent of the program is to help you better understand yourself and make it so that you can learn how to best take advantage of the energies coming your way. You support me, I support you. It’s a win-win situation.