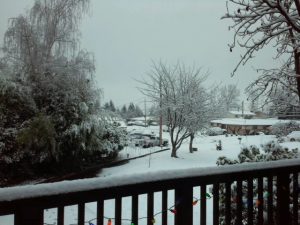 How has your weather been for the past couple of weeks? We have had cold weather and some snow in Seattle and a lot of snow in the mountains. Snow in the lowlands is very unusual for this time of year. February is usually a very nice month with the Daffodil bulbs starting to sprout and buds on other plants and trees. I hope they all survive the cold weather. I’m ready for some warm spring weather.

It has also been a very challenging time period with a lot of Mars energy floating around all over the world.  Mars rules fires, violence, and anger on the lower frequency Earth. Vesta, the asteroid of great power has been conjunct Mars since February 14 when the shooting happened in Parkland, Florida. The Mars/Vesta energy has been in Sagittarius, and that sign rules schools. The opposite sign is Gemini which rules students.

It looks like that event was meant to happen to bring young people to the point of saying “no more shootings, enough is enough. We need to do something to stop these shootings”. I am so proud of the young people who are expressing their feelings by having peaceful demonstrations all over the United States. People are taking notice of them and offering to help them. Hopefully they will be able to change things including our gun laws. Check out this link from Oprah Winfrey [Warning: Turn down or off your audio before clicking link.] Winfrey Praises Students

This Mars/Vesta energy will be in effect until the new moon on March 17, 2018. Then Mars moves into Capricorn and we will experience a different energy. Mars also rules sports and so does Sagittarius. The positive side of this Mars energy was the Olympics. Isn’t it nice to see all those athletes from all over the world gather together in peace and harmony to give us a very interesting event to watch? I love the ice skating.

This upcoming full moon on March 1, 2018 at 4:51 PM will be very intense. On this full moon, the Mars/Vesta conjunction in Sagittarius will be making a perfect trine to the Uranus/Eris conjunction in Aries. This is very powerful Mars/Uranus energy and will probably cause a lot of angry energy to surface. This could revolve around the Mueller investigation which started when Saturn was in Sagittarius. Mars, the planet of energy is in Sagittarius. Uranus rules demonstrations so I am sure there will be more demonstrations during this time period.  With Mars/Uranus being such intense energy I hope the demonstrations will stay peaceful.

Since Mars went into Sagittarius on January 26th there has been a very strong drive to shine light on the corruption that occurred in the past between politicians and dishonest people. Now the public can see the results of what went on in the past and they are becoming aware of this activity. Sagittarius rules judges, courts of law, indictments, justice, and judging. This activity will continue until the Spring Equinox and then Mars moves into Capricorn which rules governments, structure of all kind, and leaders of governments.

Jupiter turns retrograde on March 8th and this will probably bring up more energy involving sexual abuse issues. Things from the past seem to come to the surface during the time a planet is retrograde. Good or bad issues may arise.  Then we have the Spring Equinox on March 20 at 9:16 AM PST. Mercury goes retrograde on March 22 on 16 degrees (the tower struck with lightning) Aries and will start stirring everything up.

Good Friday is on March 30 and Easter is on April 1. The holiday of Passover starts on the full moon of March 31. Mars will be conjunct Saturn on April 2, a day after Easter. This energy may cause professional problems, legal battles, conflicts with authorities or government agencies. Then on April 27 Mars will be conjunct Pluto which is the god of birth, death, and transformation. This could be the end of an old cycle and the beginning of a new one based on love.

The planet Pluto will cross the ecliptic in July of 2018. This is a major aspect. The last time it crossed the ecliptic was on July 2, 1770.  That was the beginning of the Revolution in the United States and the Declaration of Independence was approved by congress on July 4, 1776. Maybe this July will be the beginning of a new form of governing system based on love and unity. Our capital was set up by the Masons using the energy of Virgo and Venus the Goddess. If you are interested in more information on that subject read the book called “The Secret Architecture of the Nation’s Capital by David Ovason”.  It is a very interesting book.

Mars will stay in Capricorn until May 15. Then it will move into Aquarius on the same day that Uranus moves into Taurus and we will see the first inkling of the new age of love. I am looking forward to Uranus moving into Taurus because that sign is ruled by Venus. Taurus rules money and we will probably see a new money system begin during that seven year cycle of Uranus.

The sun is moving through the sign of Pisces right now and there are four planets in that sign, plus the sun at this full moon. The planets in the sign of Pisces are Neptune, Mercury, Venus and Chiron. Mars conjunct Vesta will be making a 90 degree angle to the Mercury/Venus conjunction in Pisces. This can bring in love energy if you tune into it, although it still seems to manifest as anger, arguments, wind and violence in the lower frequency earth. Pisces is the last sign of the zodiac. The new astrological year starts on March 20, 2018.

The end of the astrological year is a good time to surrender and let go of all old fears that you still hold onto.    I have seen a lot of judging going on in every level of life. It is time to stop criticizing or complaining. Those negative aspects are just a manifestation of fear. What are you still afraid of? I know the past couple of years have been full of trials and tribulations. It is time to pull out of that energy. Here is a link that talks about our birthing process We are Giving Birth to Higher Aspects of Self.

I am ready to stay in the light. What we choose to manifest is our choice. I know people who are very happy right now because they feel the high frequency energy that is now manifesting on Earth. Then there are others who are still caught in the poor-me syndrome. It’s time to start looking at the positive side of life and give thanks for all of your blessings.

Once you start giving thanks every day you will see your life change for the better. It has to because what you give out comes back to you. If you give out thanks, you will receive many blessings. We are all great Beings of light and it is time to start manifesting that light. It is time to shine. It is also time to walk softly on this beautiful planet because love is a soft and gentle energy.    So Be It.

Edgar Cayce Past Life readings are still available for a $30 donation. If this is something you would be interested in receiving than check out the front page of my blog www.mahalasastrology.com and click on the button that says past life readings. There is also a sample reading there so you can see what the reading is like.

Love and blessings to all of you.    Mahala Gayle