We are at the beginning of a new world even though it might not seem that way right now with all of the chaos that is happening in our world. They say it is always darkest before the dawn and I believe that we are moving through that darkness and will soon come out into the light. There are huge cosmic waves of electrical energy that are hitting Earth right now. These waves have been coming in for a long time and have now reached the point where they are very large.

Uranus is the planet that rules electricity and since Uranus moved into Aries (fire) in January of 2011 we have been experiencing electrical charges from that planet. Eris, the dwarf Goddess sun causes chaos and when it became conjunct Uranus a couple of years ago (and it is still conjunct that planet) the cosmic waves of energy became larger and we experienced much more chaos. Soon Uranus will move out of the sign of Aries, where it has been for the past seven years, and will move into Taurus. This means to me that the next few months will be very dramatic as Uranus completes its time in Aries.  Check out the prophecy of fire by Peter Deunov. Here is the link http://www.angelfire.com/oh2/peterr/ProphecyOfPeterDeunov.html.

We are in the time of fire as prophesied long ago by Peter Deunov. He was a holy man who made a prophecy called “The Divine Fire” right before he died in 1944. In this prophecy he talks about how the earth will be swept by extraordinary rapid waves of cosmic electricity that will change everything. This has been happening for the past few years. Peter says that the force of which I speak will rejuvenate, purify, and reconstruct everything. Your heart will be liberated from anguish, trouble, and you will become luminous. Negativity will be consumed and destroyed. Sin (stuck in negativity) will be gone.

We are in the time of fire right now and will soon be finishing up that energy. Look at all the fires there were this past summer and fall and that energy is still in effect. The Bible says in 2 Peter, chapter 3 verse 11 that the day of the Lord will bring about the destruction of the heavens by fire and the elements will melt in the heat. After that we will see a New Heaven and a New Earth. This fire could happen when the Earth moves out of the cloud in space that it has been going through for several years. The elements could catch fire in the heavens. If this does happen then the sky will light up with burning meteors.

After this a new culture will see the light of day. It will rest on three principles. The first is the elevation of women, the second is the meek and humble will inherit the earth (that means the people of love), and the third is that the rights of the people will be protected. The 6th race is love and the children of love will reign. We are almost there. Remember that when Uranus goes into Taurus (an Earth sign) in May we will start to be ruled by love and the planet Venus, which is the Goddess.

It is my understanding that when we fell long ago we fell from 6D reality. We are now in 5D reality and will shortly be in 6D which is also the vibration of magic and miracles. Some of us have been manifesting that reality for quite a while now. I have had a lot of miracles happen in my life in the past three and a half years. Once we pass the fire initiation we will go into the Earth initiation (starting in May) and that is when we learn how to manifest instantly. What we think is what we will receive so please watch your thoughts.

Many people know that we are in The Age of Aquarius, which started when the planets lined up in Aquarius in February of 1962. Shortly after that the song “This is the dawning of The Age of Aquarius” came out. I love that song. It has a very upbeat vibration to it. We have been in the vibration of that age for almost 56 years now. Aquarius rules air, wind, high technology, computers, cell phones, new inventions, revolutions and the desire for freedom. The amount of progress we have made in the past 56 years is amazing.

Although many people know that we are in the Golden Age of Aquarius not many know that we can be in more than one cycle at a time and that we are also in the cycle of Virgo. I have talked about this in my articles many times but I think it is time for a reminder because we are already experiencing the energy of the Goddess. Virgo is the sign of the Goddess and the symbol for that sign is a woman.

On July 11, 1991 there was a total solar eclipse over Mexico. According to Mayan information this is the time we entered the sixth sun. Virgo is the sixth sign of the zodiac and 1991 is when we entered the cycle of Virgo, the Goddess. I have a book called The Dawn of the Sixth Sun by Sergio Magana. He was given secret information that was passed down by his ancestors to him. He says that from 1991 to 2021 is the transition period into the sixth Sun energy. We are only 3 years away from being totally in the age of Virgo.

Look at all of the women marches we have had all over the world since Trump came to power. Women are saying “we do not want to be put down any longer”. We are great beings of light and we need to change the world to one of Unity Consciousness where we are all equal. The male hierarchy threw out the Goddess a long time ago and replaced it with control. Now it is time to be free.  Think about all we will be able to do once our negativity is gone. It is our challenge to dissolve any remaining fear we still have. We will be free when we wake up to the power of love. 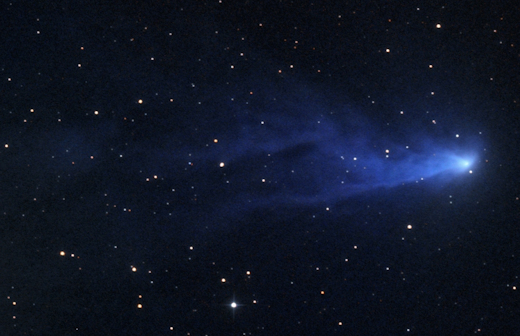 There has been a very strange comet in our heavens for the past couple of months. This comet has a very strange tail. It consists of many spikes going out in all directions. It will be closest to the Sun in May 2018. I have a book of prophecy that was written in 1975. It says in that book that before the sky lights up with fire we will see a blue comet with many spikes in its tail in the heavens. This might be the comet he was speaking about. Here is a link to that comet Strange Blue Comet.   This other video mentions that we are in a debris field right now. Earth moving through debris/Asteroid detected moving at rare speed. This means we could be in the time of the fire in heaven right now.

Hopi prophecy says that the blue star will appear in the heavens first and then the red star will appear. What is the red star? Could this be Nibiru, the planet so many people are talking about being here now?  Check it out. There is much information on the Internet about Nibiru.

Major waves of light came to Earth in December and a lot of us changed our frequency in order to bring in the energy of the higher dimensions. We can now manifest energy up to 9D or higher. This is a very exciting time to be alive. Live in joy and laugh a lot. Laughing is very healing. When we laugh we feel happy and that is how we will make it through these chaotic times. So Be It!

Edgar Cayce Past Life Reports are still available for a donation of $30. If this is something you would be interested in receiving then click on the menu option that says Past Life Readings on the front page of my blog or click the following link. www.mahalasastrology.com

Lots of love and blessings to everyone!         Mahala Gayle