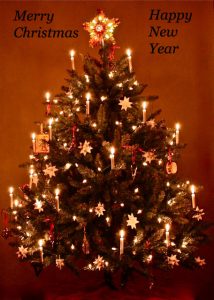 On the morning of December 11, 2017 I woke up just before the sun was rising. I looked at the sky and saw a perfect Ring of Light north of the sun. The sun came up in the SE.  The ring was quite far from the sun and was a large empty circle about the size of Earth. There were not any clouds next to it and the ring was beautiful. I wondered what it was for and then I thought about how the next day was the 12-12 Gateway and I thought I must have seen this round Gateway open a day before it was supposed to open. I tried to take a picture of it but my camera would not work.

When I was thinking about how beautiful this Ring of Light was a thought came to me about the movie Stargate. Do you remember that movie? I remember that when the right time came, the round Gateway opened in the movie and the actors went through the tunnel and came out in a different reality. I think that is what is happening to us right now. I think we just entered the energy of this tunnel of light and will come out at the time of the Winter Solstice manifesting a new consciousness that is on an entirely different frequency.

The first Gateway opened here in Seattle and now we are in the celebration of Hanukah, which is a celebration of light.  This holiday started on December 13 and lasts until the Winter Solstice, which occurs on December 21 at 8:29 AM PST. This is also the day when the sun conjuncts Saturn which starts a new 30 year cycle.  The negative energy of Saturn will not have any power over the people who walk through this tunnel of light because they will come out in a new reality. Here is an interesting link that I just received Portals Opened.

As we walk through this tunnel we need to release all of the fear we have carried for so long and held within our bodies. This has kept us on a lower frequency. As we release our fear our bodies and our minds start to lighten up and we move into a different frequency called love. The word FEAR adds up to the number 21. The word SATURN adds up to 21. This means that we will be through the cycle of Saturn by the Winter Solstice so it’s time to move fast-speed through any fear we might still have stored in our bodies. Mercury also turns direct on the Winter Solstice.

I just received an email from Dr. Meg. She says “three Stargates will open simultaneously on December 17, 2017 at 5:46 AM eastern time. She calls these Stargates the Pernacian Corridor. Two to three days after this triangulation passes magnified quakes will start to happen. This corridor will splinter off smaller versions of the same for nearly three weeks. It will shake things up universally, including the Earth.” Could this be the opening of the sixth seal in the Bible where the sky opens up like a scroll and there is a great earthquake? The seventh seal is the Rule of God on Earth. Her message is very long so if you go to The Message by the Masters the above information will be in that part. Here is the link to her article Message.

It is definitely time to “Think with our Hearts.” Our heart is our magnetic center and is the most powerful organ in our body. We need to connect our head brain with our solar plexus brain, and then connect those two brains with our heart brain. Then we can start thinking with our hearts and when we do that, judgment will disappear, criticism will be gone, and love will then replace that old energy.

Jesus said “Judge not lest you be judged”. Our solar plexus has held a lot of fear over the years. We do not need to live in fear anymore. It is time to live in love and carry the soft gentle energy of love. We are great Beings of Love and it is time for us to start manifesting that energy all of the time. The word fear adds up to 21, so does the word peace. The word anger adds up to 9, and so does the word love. Conquer fear and anger and you will manifest peace and love.

As of December 21 both Saturn and Pluto will be moving through the sign of Capricorn. This will be quite a combination. Saturn rules structures of all kinds and governments all over the world. There have been a lot of governments that have gone through major revolutions since January of 2011 when Pluto had just started its journey through Capricorn. Our government started changing when Pluto moved up to 13 degrees in 2015 because that is the degree that rules Washington, D.C. Now our government is in major chaos. This will continue until all of the corruption comes to the surface. Then it will change. People are starting to stand up and say “no more we have had enough; it is time for a change”.

With both Saturn and Pluto in Capricorn it will bring major changes. This will include more earth changes and they will be large ones, like the fires that are burning in California right now. Those who decide to stay on 4D will experience some very large earth events. Those who choose to walk through the Gateway that is now open will move into a reality of love and peace. It’s all a matter of consciousness. The lower consciousness stays here and the higher consciousness moves on to a reality of peace, love, and unity consciousness.

I believe that we have reached the end of a major cycle and are ready to move into a new reality manifesting love and unity consciousness. It is time! Many of us have gone through a lot of trauma and body pain during this Ascension cycle. I am ready to live in a new reality of abundance.

Look at the challenge of creating a New Earth. I think that will be a lot of fun. Aren’t you tired of the old violent Earth?  Aren’t you ready for peace and unity? Aren’t you ready to live in abundance instead of having to watch every penny you spend? I know there are a lot of rich people out there who have not had the challenge of lack but I know so many light workers who have really had challenges with money this life-time. It is time for equality for everyone. The meek (the ones who manifest love) will inherit the New Earth.  No fear! Everything is going to be alright.  So Be It.

Happy Holy Days to Everyone! Enjoy this beautiful season of light!

I would like to thank everyone who has sent me donations of money. I send lots of blessings and angel love to all of you.

We have a special on Edgar Cayce Past Life charts from now until the end of December. If you order two charts for $60 you will get the next one free. They do make nice gifts. You can also just order one chart for $30. If you are interested in something like this just click on the button that says Edgar Cayce Past Life charts on the front page of my blog. My son does these charts and I bless him for doing that for me.