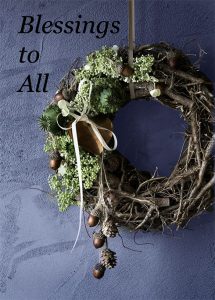 We are now in December, the month of many celebrations.  We started this month with Mercury turning retrograde on December 2 at 11:34 PM PST. Then the super full moon is on December 3 at 7:47 AM PST, which will cause high tides.  The combination of Mercury turning retrograde at almost the same time as the full moon will cause a very chaotic full moon. Please stay calm as we continue to experience the energy of this full moon.  This energy will bring unexpected events so expect the unexpected this month.

Mercury will be conjunct Saturn at this full moon and they are both conjunct the Galactic Center. This will bring very intense energy to Earth. There may be problems with machines like computers, electronic devices, and other things involving communication or transportation. Mail may start getting mixed up and if you are waiting for something to come in the mail it may be late in arrival or get lost. Mercury rules communication of all kind.

With Saturn conjunct Mercury it causes events to arise concerning serious responsibilities which can weigh on your mind and sap your vitality. This serious responsibility may arise through groups or organizations. This energy often coincides with the signing of contracts and the formulation of serious agreements: like the Tax Cut Bill that was signed as Mercury was just starting to turn retrograde. Now the House and Senate will have to agree on one bill. This may be hard to do in the energy of Mercury retrograde which will last until the Winter Solstice on December 21, 2017.

We also have Mars opposing Uranus, which is still conjunct Eris, in this full moon chart. This energy causes arguments and disagreements.  Our Congress will have to work with the tax bill and the Indictments during this chaotic time period.

This full moon will be in Gemini, which is ruled by Mercury and will be on 11 degrees. This degree rules “Liberation from the ghosts of the past”. That sounds good to me. Because Mercury is retrograde I am sure things from the past will continue to surface this month to be released from your consciousness and mass consciousness. More things from the past will surface on the world level.

Another interesting aspect in this full moon chart is that Lilith will be conjunct Chiron, the wounded healer. This means there will be a lot of healing energy coming to Earth this month. Continue releasing your stuff so when Mercury goes direct on the Winter Solstice you will be free from your past and ready for a new beginning.

Mars moves into Scorpio on December 9, 2017. Then both Jupiter and Mars will be in Scorpio. This will bring up more energy on sexual abuse and other legal issues. In my November 3 article I wrote “This full moon Astrology chart is very interesting. In the Washington D.C. chart the moon will be in the ninth house, which is the house of Sagittarius. This sign rules courts of law, judges, traveling, dealing with foreign countries and their leaders.” The sun is now in Sagittarius. The last full moon pulled us into the time period of dealing with legal issues, especially if they deal with a foreign country. Because Mike Flynn just admitted to lying to the FBI yesterday this appears to be the beginning of many legal issues that will surface in our government.

Pluto is the planet of birth, death and transformation. This planet has been affecting Washington, D.C. for a couple of years now. Pluto moves slowly and it has really been doing a job of transforming our government. What will be the outcome of this transformation? Does anyone know? Unexpected happenings are on the agenda so who knows how it will all turn out?  Our government appears to be in chaos right now and this will continue for a while longer.

Pluto will start affecting the city of New York now where our financial center is located. How is Pluto going to affect that city? The Stock Market is there and the price of stocks has gone up and up over the past couple of years. Is the money market ready for a major transformation? Are we ready for a new type of money system? Look at how much the Bitcoin is worth. And now there are other types of Crypto currencies. It’s time for a different type of money system where there is not such a difference between the poor and the wealthy.

Mars conjunct Jupiter in Scorpio may also cause Earth changes or more violence in the Middle East area, especially Saudi Arabia, Iran, Iraq and that general area. Moscow is also ruled by Scorpio as is Putin because he has Scorpio rising. He has a Libra sun. The West Coast of the United States will also be under pressure by the planets, along with North Korea and that area of the world.

Because Uranus has been in Aries which is ruled by Mars, we have been in a very violent period of time for the last six and a half years. In May of 2018 Uranus, the planet of change goes into Taurus which is ruled by Venus. Then we will start having the interaction between Venus (goddess energy) and Uranus which is male energy. Before we can start creating this peaceful energy everything corrupt from the past has to surface for everyone to see. Or we could just move into a higher frequency so we are above the chaotic energy.

I wonder what this next year will bring us. Maybe we will have visitors from space. Check out this video – Massive UFO. Maybe it’s time to start thinking about what we would like to create for this upcoming year. One of the most important things in life is to be grateful for all of your blessings. You could try waking up every morning being grateful for everything and see how your life starts to change. Grateful has the same frequency as the word love and the word money. They all add up to the number nine. Think about that.   So Be It!

I would like to thank everyone who has sent me donations of money in the past couple of months. I now have a new computer ready for my use. It is so fun to have something new to use. I send lots of blessings and Angel love to all of you. Edgar Cayce Past Life charts are still available for a $30 donation.  They make nice gifts for the person who has everything.  If you are interested in something like that just click on the button that says Edgar Cayce Charts on the front page of my blog www.mahalasastrology.com  I would also like to thank my son Dave for all of the work he does for me. He is a wonderful son.

I wish all of you a wonderful holiday season blessed with much love, joy, and happiness.  *Mahala Gayle*