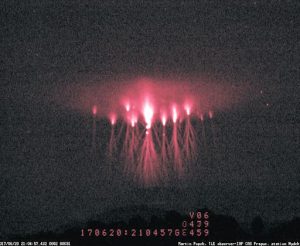 The Myofascia is a fascinating part of the Human Anatomy and one which has largely been ignored by medical science and is unknown to many complementary therapists too. It’s as if until the cosmic energies were right for its expansion, the Myofascia has stayed hidden right beneath our skin. There has been a surge of interest though in recent years emanating from the USA led by the research of Sue Hitzmann who wrote The MELT Method (1). This simple method is helping many people, including myself, overcome long term pain issues caused by dehydration of the Myofascia. In its healthy state the Myofascia is gel like and it takes sustained pressure to allow rehydration to occur. Hence its connection in texture to Jellyfish.

My interest in the Myofascia was sparked on the spiritual/astrological level when I learnt that it is a communication system within our whole bodies which works instantaneously – faster than the nervous system. My mind leapt immediately to the work The Nine Dimensions of Conciousness by Barbara Hand Clow (2) which explores the channellings she received from the Pleaidians and the quantum science which has emerged to support these teachings. One interesting fact that had always stayed in my imagination is that every photon has a counter part twin out there in the cosmos, potentially in instantaneous communication.

Photons are particles of light that carry the whole Electromagnetic range. Since the 1990’s Astronomers have noticed a large increase of high frequency Photons in Earth’s atmosphere which is called the Photon Band. This is the way in which the Pleaidian’s have told us change will occur on our planet.

The Myofascia has some other interesting aspects which make it a perfect contender for an inbuilt human communication system with the Cosmos. These are

The Myofascia explains how the Human evolutionary changes which have long been prophesied can be achieved on a physical level in a short space of time. Once you start working with the Myofascia, even on a purely physical level, it will start to release emotional trauma, melt rigid mental beliefs and open multi-dimensional sensory experiences. There are of course other ways to do this too, I’m just feeling the Myofascia adds another layer to what is already known and will continue to do so.

I’ve just been on a beautiful retreat in Catalonia, Spain where I was opening the Myofascia before the participants went on walks in the forest and looking at the stars at night. This was experimental, and everyone loved it and felt a difference to their normal experience. We had the most amazing experience in the forest where we came across hundreds of butterflies in a grove, it was perhaps the most beautiful moment I have ever experienced. It was like arriving in the Garden of Eden. A few of us went back to try and see it again but it was gone. It felt like arriving through a portal into the New Earth. I have before seen New Earth in my inner vision, but never actually been there on 3D Earth so this was very exciting. The Myofascia being consciously opened and centrally aligned seemed to enable this process to happen.

On this Retreat the Yoga teacher Suraya Magda Ray was also working with the Myofascia which she had come to along a different path to myself. It meant a weaving together of our different practices, along with the sound healing where Kath Reade took us on a journey with Turtle and the Ancient Bee Priestess, was quite profound.

The Holographic Mind can communicate with other species, other humans and even across time and space with Inter Galactic intelligences. I took with me on retreat Tom Kenyon’s new book The Arcturian Anthology (3) which I just bought, and wow was I having some alien contact. The book begins with Tom Kenyon’s first contact with the Arcturians at Mount Bugarach in France which is actually pretty close to where I was in Catalonia near the Pyranees mountains. Some 15 years ago I visited Mount Bugarach to find it covered in white butterflies. Perhaps the butterfly with its soft energy, its amazing birth into being is a potent symbol for the journey we are on. May we all be blessed by the Spirit of the Butterfly.

Note: I was practicing the breath recommended by Esu, Arcturian Meditation Master in Catalonia (in Arcturian Anthology) to open a channel and one of the ways they seemed to be showing themselves was by thunder occurring on 3 occasions I began the breathing which would be an extraordinary co-incidence over the course of 3 different days. One of the days was the 20th June when this photo was snapped over Europe, albeit in a different country but then again the sky is a big place and knows no national boundaries. What do you think? An Arcturian Ship?

JELLYFISH SPRITES OVER EUROPE: On June 20th, a thunderstorm in Austria unleashed a spectacular display of lightning….