October will be quite a month with two eclipses; one a blood red lunar eclipse on October 8, 2014 and the other one a solar eclipse on October 23, 2014. And Mercury will be retrograde almost all month.  That will be quite a combination. The full moon on October 8th will be at 3:51 AM PDT. Those who are living on the West Coast will be able to see the eclipse if they choose to get up around 3:30 AM, or sooner. Because the moon will be conjunct Uranus at the time of the eclipse, this is considered an Occultation by the moon. This eclipse will be seen as a very large moon and very powerful because of the Uranus conjunction. Uranus rules light, lightning, and high technology.

Last year on April 15 there was the first blood red moon of the series and it happened on the Jewish holiday of Passover. That festival is symbolic of war. The Russian-Ukraine war got really serious in April, and the Israel-Palestine war was in July. There was a three month time period before the Israel/Palestine war started.  Eclipses set up events that sometimes happen several months after the eclipse. Now we have I.S.I.S as one of our main concerns, plus the other wars that are still happening.

This upcoming blood red moon will be at the beginning of Sukkoth, which is the Jewish Harvest Festival. This is supposed to be one of the happiest festivals of the year. And of course people all over the world celebrate Harvest Festivals in October, and they are all considered happy festivals. This blood red moon eclipse will be seen over almost all of the United States. So what will this full moon bring?

This upcoming full moon will be on 15 degrees Aries. Here is what my degree book says about that degree. “The fact is that every individual has his/her ultimate conscious task which is the weaving of the Immortal Body, also called the Gnostic Robe of Glory, or the light body. It may sound very mystical and far out but there is a moment in every cycle when, in however small a degree, every individual may be confronted with the potentiality of a fulfilling act of self-realization and may find himself ‘clothed in light’ for an instant.”  (This sounds very interesting to me.)

Also at the time of the lunar eclipse the moon will be conjunct Uranus in opposition to the sun in Libra. There will be all kinds of unexpected events that will happen with the moon conjunct Uranus, which brings sudden unexpected changes.  This full moon will also again trigger the Cardinal Cross because Venus will be on 10 degrees Libra, Pluto on 11 degrees Capricorn, and Uranus on 14 degrees Aries.

Venus will be conjunct the Sun, which will be opposing Uranus, and that means there are big changes coming and it might involve money. Venus is the planet that rules love and money.  Maybe there will be an unexpected event around money, and maybe it will be for the good of all. The Jewish Shemittah year started on September 25, 2014 and ends on September 13, 2015. The Shemittah year waives all outstanding debts. Maybe it is time for a noticeable change in our financial system. I just heard that 105 countries have dropped using the dollar and have turned to the BRICCS financial system.

The next eclipse will be a solar eclipse on October 23 at 2:57 PM PDT. This eclipse will be widely visible in the United States and Canada. These countries are definitely in for some changes. Mars will be lined up with the Galactic Center so we can expect major energy coming from that area to Earth.

Mercury and Jupiter are the main planets of this eclipse and Mercury will be opposing Uranus at that time. There could be major storms in different parts of the world with this aspect in affect. Mercury and Uranus in aspect rule storms and also transportation, which may cause a lot of accidents. Jupiter square Saturn may cause financial problems although Venus could turn those problems into positive energy.

The next major festival is the Jewish Festival of Light. This is another major festival and is very beautiful with all the lights that will be everywhere. This festival starts on December 17 this year and lasts for about a week. The Winter Solstice, which is considered the birth of light, will be right in the middle of this festival. The solstice will be on December 21 at 3:03 PM PST. On the same day, at almost the same time 2:45 PM PST, Uranus, the planet of light will turn direct. This means that light will be dominant after the solstice. Maybe we will all be filled with light at that time and start to shine like a brilliant star in the heavens. Wouldn’t that be nice?

Right now we are watching thousands of people demonstrating for freedom in Hong Kong. This is Uranus in action. Uranus rules revolutions, riots, and demonstrations of all kinds. It is the planet that demands freedom, especially because it is in the fire sign Aries. Have you ever tried to hold an Aries down? And Uranus and Pluto (the transformer) will be in exact aspect from Thanksgiving to Christmas this year. We are in a very revolutionary time period.

There are people who say “the dark is going to control us” well; that is not going to happen. They are at the end of their control. Haven’t you noticed how all the negative things the controllers have done is coming to light so everyone can see what they have done? This is what Saturn in Scorpio has been doing for the past two plus years. It has uncovered all our dark stuff, or our shadow self, and brought it out into the light so we can see it and release or neutralize the energy. We are now working on creating balance in our lives. The negative cannot exist without the positive and that is just how it is.  Negative dark energy can become dominant and control people at times and it seems like it has been that way for a long time so now it is time for light to rule.

Move out of fear. Fear is just ‘false evidence appearing real’.  We don’t need that energy anymore. It’s like we have been going through a dark tunnel and are about to come out into the light. We are fast approaching a world of love and peace and beauty which we have all been striving to create for a long time. We are almost there and when the fire trine comes into force, that energy will burn up the impurities in our bodies and we will become great Beings of Light.

By December 21 we will begin the start of a new cycle.  Then Saturn will move into Sagittarius on December 23 and we will start having a major fire triangle in the heavens. We will have the three large planets of Saturn, Jupiter, and Uranus all in fire signs. It will then be time for major movement because fire signs are very active.

There was a Beam of Light that hit Earth on August 24, 2014 and caused an earthquake in Northern California. At that time Jupiter, Venus, and the moon were all in Leo, making an aspect to Uranus. And the sun was conjunct Regulus, the Royal Star of the Lion. This beam of light hit me and I am still reeling from the affects, and that was over a month ago. It felt like everything in my body was rearranged. Here is the link to that event: http://www.dailymail.co.uk/sciencetech/article-2734573/Mystery-glow-Pacific-Ocean-Pilots-left-baffled-strange-orange-red-lights-spotted-dead-night.html 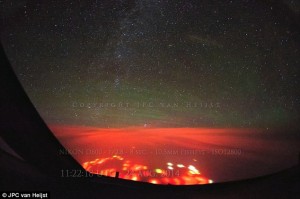 If you haven’t received your Edgar Cayce Past Life Reading yet, hang in there because I am doing them as fast as I can. You can contact me at planetalert@hotmail.com  if you have any questions.