The Sun was at the closest point to Earth yesterday, which was January 4, 2012. This was the end of the High Holy Days and started a new year. Isn’t it interesting that the comet called Lovejoy was in our heavens during that whole time period. It is still there and is very beautiful. Comets are messengers, and what a lovely message it brought to us. It told us to experience love and joy this year. This sounds like a good way to start the New Year.

On November 24, 2011 we had a solar eclipse. This set up an initiation period for many light workers. We decided to walk through the underworld for a period of time, and what a trip that was. Pluto is the God of the underworld and this brought many challenges into our lives. On December 28, 2011 the Sun was conjunct Pluto which meant we were almost through that walk. However, events seem to go from Sun to moon and on January 8, 2012 at 11:30 PM PST we will have a full moon. This culminates our journey through the dark so we can come back out into the light. It’s like the light is ready to be born at the time of the Winter Solstice, although we have to go through the tunnel of birth until the Sun is at the closest point to Earth. This is why it is called The High Holy days, we are birthing the light.

Now, what are the planets doing? The first thing I would like to talk about is the Dragon’s head or tail, which are the moon’s nodes. I think that the nodes of the moon are the most important points in an astrology chart. Since March 3, 2011 the north node has been moving through Sagittarius. It will be in that sign until the end of August, 2012.

The sign of Sagittarius rules the banking system. What has been on the minds of people for most of this year? It has been the challenges of the banking system, and the loss of jobs. The sign of Sagittarius also rules law, lawyers, judges, and lawsuits. Recently there have been several lawsuits filed against the major banks. The governor of Massachusetts filed a lawsuit against five major banks for illegal foreclosure of houses. There have also been other law suits filed against the banks. It will be interesting to see the results of these lawsuits.

I have heard for years that the economy will crash and it will be terrible. I have never believed that, although it has been pretty challenging since the Stock Market crashed in 2008. I do believe there will be a change in the money system to one on a gold standard. I think this has been in the works, behind the scene, for years. We need a new money system and I believe we may have a new one before August of this year. Time will tell.

Sagittarius is also a fire sign and rules mountains and volcanic eruptions. There have been many volcanoes erupting lately. Sagittarius is also the sign of higher consciousness and it rules the Galactic Center. There is very high frequency energy coming to Earth from the Galactic Center and this will continue to happen. This high frequency energy is making time go by faster and faster until time ceases to exist. There will be no time on the higher frequency Earth.

Then we have the planet Pluto, which is making a trip through the sign of Capricorn. Pluto moved into Capricorn in November of 2008. This started the transformation process with businesses. The first to be hit were the automotive companies. Then other companies started laying off employees and the recession/depression started.

Capricorn also rules governments, buildings, and houses. There were lots of employees laid off in the construction field, and of course there has been many houses foreclosed on. Pluto will be in Capricorn for a long time so we can expect many more structures to go down, or be transformed. Look at how many structures have been destroyed by earthquakes, storms, floods, tsunamis, and volcanic eruptions. This will continue as we experience more natural disasters. We have also seen many changes in various governments around the world. This will also continue.

Now we come to Uranus. This is a very volatile planet and brings many changes. It will fit right in with the year 2012 which is a five year. The number five brings changes. Uranus is an electrical planet. It rules wind, storms, lightening, and our grid system. Uranus was in Pisces when the Tsunami in Sumatra happened in 2004. When Uranus was moving out of the water sign Pisces, the tsunami happened in Japan. That was an example of the force of Uranus in a water sign.

Uranus moved into Aries on March 10, 2011, then it retrograded back into Pisces, and now it is in forward motion in Aries. It has a seven year cycle. The sign of Aries is ruled by Mars so we have an interaction between Uranus and Mars for another six years. This is a very fiery, revolutionary, energy. The revolutions started in January of 2011 and continues to this day. It will not stop because the energy is on a roll and people will continue to demonstrate until they get what they want, and that is freedom.

There are those who say the dark ones will continue to control us and take away all of our freedoms. They have already tried to do that and it will not work because the dark ones are on their way out. Divine intervention will take care of that by raising the frequency of Earth so they will either change, or they will cease to exist. Once the photon belt is here everything will change.

Neptune is the female Goddess. Neptune moves into her own sign Pisces on February 3, 2012. This truly ushers in the time of feminine, or heart energy. On the negative side Neptune rules deception, and drugs of all kinds both legal and illegal, and all that goes along with the illegal part like drug wars, etc. On the positive side Neptune rules cosmic consciousness, especially in Pisces. Neptune is the Goddess that came out of the water, or the ocean of cosmic consciousness.

Jupiter is our largest planet. It is in the sign Taurus right now which rules money, and will stay in that sign until mid June, 2012. There may be some large quakes along the west coast this year, hopefully not in populated areas. The undersea volcano off the Oregon coast erupted last August when Jupiter was activating the area off our coast. It was really interesting to watch an undersea eruption. This spring it will be moving over land. Then there are a lot of money issues that continue to be in the news.

Saturn is our task master and has been in the sign of Libra for the last two years. Libra rules relationships and there sure have been lots of relationship issues to deal with. Saturn will be in Libra until the first part of October this year, and then it will go into Scorpio and the energy will change. Scorpio is ruled by Pluto, the God of the Underworld. This is the time when the dark will be transformed into light.

Next there is Mars which is making a long journey through Virgo, the healer. Mars is putting forth a lot of energy toward healings. Do you need healing on any level? Then now is the time to get that healing. It is also a good time for body work. Virgo is ruled by Mercury, the communicator, and Chiron, the healer.

Mercury has been in kind of a challenging position lately. It was hit by at least two solar flares in the last couple of months. That is bound to have an affect on that planet, which in turn affects us.

That covers all of the planets except the dwarf planets and I won’t go into that right now. Then we have the dark moon Lilith. Did you know that we have a second moon? It was first seen in front of the Sun in 1631 and appeared as a red/orange ball. We can’t see it unless it is in front of the Sun or maybe the moon, like the picture that is going around the Internet of two moons in our heavens. Astrologers have used the dark moon in their charts for a long time. It is a very powerful moon and triggers lots of events. 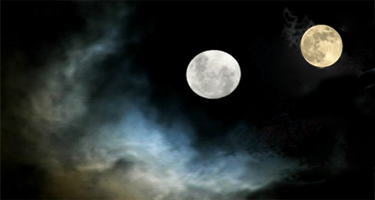 Courtesy of the Galactic Free Press. Click on the picture to visit their website and read the article

Don’t forget to stay in the light. Our light is needed on the planet this year because there will be so many changes. We are so lucky to be here, even if we have been kicking and screaming for years saying why did I choose to come to this planet? Soon we will experience wonders beyond our wildest dreams.           So Be It!