This beautiful New Moon combines its energies with expansive Jupiter and poetic Neptune in the oceanic water sign of Pisces, so it is a heady combination. Our imaginations may soar with new ideas and perspectives, but it also may also be a time of feeling at sea without an anchor, dreamy and even confused as the old reality dies and the new is birthed.

You may be aware that it has now been shown that the ancient Chinese i Ching is an exact mirror of our own DNA, and that Human Design and the Gene Keys are modern transmissions which speak directly to this level of being. The 64 Gene Keys make up 21 Codon Rings and it is the Codon Ring of Divinity which is activated here by this New Moon along with Neptune and Jupiter. It has the most divine healing qualities of Tenderness (37), Truth (63), Grace (22) and Compassion (36), so it really is a Bodhisattva awakening for those ready to rise to these loving frequencies. 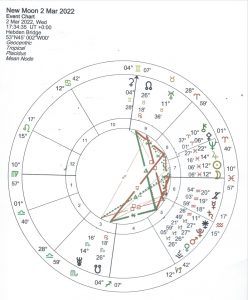 I am offering a practice between the New Moon and Full Moon to encode this cosmic gift directly into your DNA – see below for details. This Codon Ring is also able to rewire our Solar Plexus to a super soft strength.

There are a few other glorious things cooking in the cosmos worthy of mention and actually are more grounding. Venus continues her long transit with Mars in Gene Key 60 called the Cracking of the Vessel, and now they are just one degree away from powerful and transformative Pluto. The Tribal Laws of Marriage and Gender are being rewritten. Just as I’m writing this my Dad told me the new James Bond is a woman of color – that is something I could never have imagined in my childhood as James Bond was the ultimate alpha male. It shows how the world is changing in many different ways. Gene Key 60 has the shadow of Limitation, the Gift of Realism and the Siddhi of Divine Justice. And in the Human Design Body Graph it is in the Root Chakra which is a great balance to Neptune and Pisces.

This is where the Pluto Return in the USA is taking place, an opportunity to aspire to higher freedom and liberty for everybody and not just a few.

Vesta who is the Priestess archetype and represents inner authority is also exactly conjunct Venus. I feel she is supporting us specifically in relationships to honor our own spiritual path and not to give up our dreams for another. Where we are in co-dependent relationships where perhaps neither party is growing any longer this may be an especially challenging time because the cosmos really wants us to blossom into our full potential. Ask if your relationship is dulling you down, asking so many compromises of you that you might as well not exist? What is going on inside that allows this compromise to happen? That is the key question so you can begin to change these patterns.

The masculine in this equation may also represent ‘Corporate America’. How has your life been compromised by buying into a certain set of values and beliefs? Sometimes the answers to these questions can be painful when we realize the extent to which our precious lives are wasted and our growth tarnished by toxicity.

The Cosmos however is determined for us to flower and like the rest of nature we are resilient. This blossoming is strongly supported by the Moon Nodes forcing us out of compromise and mediocrity in Gene Keys 14 and 8 and into our own personal style and exquisiteness.

Another wonderful energy in this cosmic cauldron is that Saturn in Aquarius has just moved into Gene Key 49 with its Gift of Revolution and Siddhi of Rebirth. The Dream Arc animals for 49 are the Horse and the Butterfly which have been very present for me in the last month. Like the Caterpillar, it’s impossible to say how the Rebirth will look, but we can have faith it will be beautiful because God has a wild imagination when it comes to creation. Mercury and Astraea Goddess of the New Golden Age energies is also here in the 49 which is very exciting because Saturn is the creator of the new forms. Perhaps also Jupiter and Neptune can enhance our imaginations beyond our limited perception?

My highest vision is that we live in the ways of the Indigenous peoples – peacefully with each other and nature, free from the illusion of lack that pushes us into greed and survival warfare. Once we realize we are actually living in the most biologically abundant place in this Solar System we can break free from these limiting and dangerous ideas that our entire world culture is built on. Perhaps through the conflict of Russia and the Ukraine we may perceive the futility of that path to war and only a much deeper revolution of the heart can turn things around. It was very interesting to me the invasion of the Ukraine started the day after the USA Pluto Return suggesting the two ‘empires’ are intricately connected and both in dying phases of the life, death and rebirth cycle.

As much as we may desire change it is scary to be in chaotic and changing times. Even good systems may need to die and if they are still needed will be rebirthed in another form.

I invite you join me in The Venus Moon Inner Sanctuary on a high vibe platform called Soul Tribe Online where I will guide you through the Morning and Evening Star phases of Venus getting the full benefit of her passage through the zodiac.

Venus in her Capricorn cycle is about success on the material level and aspiration for the highest good of all. If you are an ambitious person and yet haven’t quite blossomed fully this Venus journey may be just what you need. Through the Descent of Inanna process which mirrors Venus’s passage you will release much that blocks your progress and rise as Evening Star with a strong sense of your Totality of Self.

Also, in the Venus Moon Inner Sanctuary there are regular 30-minute LIVE daily practices – starting 2nd March New Moon is a Mudra Sequence for the Codon Ring of Divinity awakening and encoding Tenderness, Truth, Grace and Compassion into our DNA. The call is live 1pm Pacific/9pm UCT until Full Moon with a recorded video to practice at other times.

My Astrology/Gene Keys calls are Mondays at 8am Pacific/4pm UCT – these are also recorded and can be watched anytime.

Join www.soultribeonline.com today for $29.99 a month and lets party with Venus together! You can cancel at any time