A lot of synchronicity has been happening around the Climate Change conference happening in Glasgow, Scotland, so read on for at optimistic view of what’s emerging.

It is interesting, first of all, that this is the 26th Climate Change Conference as the 26th Gene Key connects into the Earth Light Grid. Around a month ago the magic started flowing to myself and others about COP26 when I heard about some artist/pilgrims walking the ‘Spine of Albion’ ley lines in the UK, having ceremonies at the many sacred sites along the way and gathering support to ‘Listen to the Land’. The pilgrims are asking, wherever you are in the world, to do a silent walk, a ceremony or a prayer for the highest outcome of this conference for all of humanity before or during the conference.

The COP26 conference begins 31st October to 12th November so here I share some Astrological information to gain a deeper insight to the dynamics at work.

One of my favorite parts of Melanie Reinhart’s book Chiron and the Healing Journey is the chapter on ‘Wilderness of Soul’. I’ve found this ‘shamanic’ aspect of Chiron to be a powerful healer and bringing humanity into a state of Equality and pure Oneness with Gaia. We cannot actually be anything other than this, it is only at the level of mind that we are corrupted into believing we are separate from the whole eco-system and each other. Chiron in Aries in its retrograde motion has moved all the way back to 9 degrees 27’, so if you had your Chiron Return a year ago like me, you are having a second one right now! Chiron is for a brief time back in Gene Key 17 with its gift of Far-sightedness which is absolutely perfect – because now is the time we need to be looking towards securing life for the generations of the future whether humans, animals or plants.

Salacia a Water Nymph who listens deeply to the oceans, is conjunct Chiron at the moment. Salacia, with her special animal the Dolphin, also transformed Neptune from a raping, privileged god into a sensitive, loving husband so she has vast transformative powers. Make, the Easter Island god, whose themes are very much connected to environmentalism is opposing Chiron in Aries. These are just two of the ‘Indigenous’ TNO archetypes that are awakening within us.

The Chiron in Aries children of the 1970’s have a highly individualized streak, and at the highest frequencies offer themselves as a ‘hollow bone’ to the Creator to speak through. Chiron in Aries babies were a generation who strongly resisted homogenization allowing for many changes in the world to come about, and the good news is another generation of them are being born right now. It is interesting times because although we are moving towards working together, our individual genius blossoming is also paramount. This is why I love the Gene Keys so much, as it allows us to access this Genius within our own DNA whilst simultaneously closing that space of separation our minds create.

Chiron is also exactly opposite Hygeia at 9 degrees Libra 40’which is perfect because she is a Goddess of Healing, deeply connecting us to Gaia and the Sun/Moon through our billions of body clocks known as Circadian Rhythms. These ‘clocks’ are now recognized as being fundamental building blocks to good health – if your sleep is suffering so is your body and whole system. Being in tune with Gaia is the ultimate key to vitality.

Secondly, let’s talk about Ceres the Mother Goddess who is very much connected to our relationship to the Earth and especially through the living food we eat. She is in Gemini so this really is an excellent time to be listening to the land in our different localities and talking about the important issues. What does the Earth really need from us? Can we stop second guessing that with our minds, being overwhelmed, being indifferent and just pause and listen.

Ceres has been travelling with the South Node (karmic past) for some months and the South Node recently moved into the 34-20 axis. Gene Key 34 I have been having powerful synchronicities with the past year as one awakening a Siberian shamanic tradition which once seeded all over the globe – and is now awakening again. Shamanism and Indigenous people globally have been persecuted and ridiculed by all the major religions and science, but now is the time their wisdom is being heard by more and more people.

On that front, it’s interesting to me this COP26 conference is happening in Scotland because Wales, Scotland and Ireland all have deep, mostly invisible traumas as some of the first people experimented on as colonies. Below is my painting of Hag Mountain on the Isle of Harris, Scotland. It is one of many places where people were force-ably removed from their fertile, sacred lands by English landowners – I am English deeply rooted in my DNA this lifetime and healing this ‘oppressor’ history. This path you see myself and my friends walking on is a funerary pass used to take bodies back to the sacred lands by foot before the advent of vehicles. I paint with my left hand to see what emerges. In this painting there is blood coming from the Hag Mountain soaking the land – this painting is in some way transmuting the pain the land holds of human traumas. 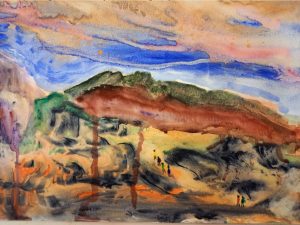 In Scotland the Indigenous Pictish people were completely wiped out by the Roman invasion, and made extinct. So, there is much healing in this land and ancestral collective memory that is ongoing. 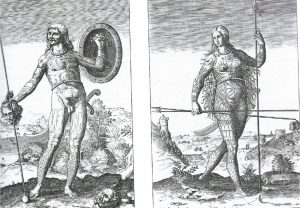 Finally, we come to Venus and she too is in a very interesting position. She will cross the Galactic Centre with Juno Goddess of the Sacred Marriage during the conference giving a direct ‘hotline’ to this part of the galaxy where Creation is generated. I feel here Juno calls for us to take a contemplative, Yin approach of listening and then to take Yang action based on that deep listening. It also suggests male female balance in the world is a key to the unfolding process. The patriarchal domination of the Earth is in its dying phase and everything now speaks of attuning ourselves to natural rhythms, to the Heart of our Mother whom we can completely trust to take care of all our needs. 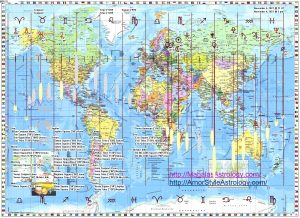 On the 4th November the New Moon is in Scorpio and Gene Key 44.6, supporting at the highest levels working together as ‘Synarchy’. Opposing the New Moon is Uranus in Gene Key 24.6 which in turn will support the breaking free from addictions which is ultimately what we need to do…stop going around and around doing the same old thing. We need a neural rewiring of how we do things to break the old patterns and clean up the corruption. This is something each of us can do in our lives supported by this New Moon.

On the 8th November Venus and the Moon come together in their final Kumari Kiss of the Venus Evening Star Cycle. This takes place at 2 Capricorn 36’ in Gene Key 10.5 with its Gift of Naturalness And Siddhi of Being. It is a powerful activation of the Crown Chakra. It seems somehow so wonderful for Venus after 17 months of her epic journey to arrive at this simple place of Being!

One final thing to add in support of a positive outcome of COP26 and beyond is that Jupiter who rules human laws is in Gene Key 49 whose highest frequency is Revolution, holding the possibility of a complete turnaround of ideas for those in authority and in the collective – both of which are needed. As humans we manifest the future through our thoughts so it is vitally important, we have hope and that we clear vision of the harmonious world we would like to live in.

There is also a Partial Lunar Eclipse happening across the Taurus Scorpio access on the 19th November so subscribe to the Blog to follow the story.

You can find out more about the Listen to the Land Project at https://www.pilgrimagefornature.com/walking-with-us

If you live locally in Hebden Bridge, Yorkshire there is a local Listen to the Land silent walk on Sunday the 7th November. This is the Facebook event for that https://fb.me/e/RI1q7VdS

I offer one to one readings in person, on Zoom or it can be sent to you by email as sound files. Contact me at astroalison@gmail.com for full details. It includes a Holographic Sabian Symbol report which is timeless, Goddess Asteroids and transits for the period ahead.

I am now teaching Astrology/Gene Keys on a beautiful, high vibe community platform called Soul Tribe Online www.soultribeonline.com. Soul Tribe is a Sanctuary of kundalini yoga, healing and astrology offerings of the highest standard. Based in Ojai, California it is attracting people from all over the Globe who feel the calling to come together in organic and non -hierarchical ways that will shape the future.