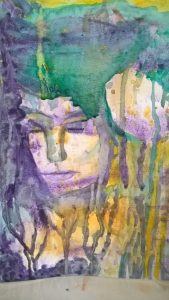 There has been so much incredible transformation of consciousness within humanity in the past few years it has at times been difficult to capture it in writing. Alongside these big shifts have been challenging events in Britain threatening to tear families and communities apart which have been some of the most challenging issues in terms of what to do or not do. This has mirrored the election of Trump in the USA and marks a turning point in history. It is in many ways a time to allow ourselves and others to grieve for lost worlds and ideals as we approach the Pluto Saturn conjunction in 2020.

What has been central in my world has been anchoring the 7th Violet Ray of the Atmic body (the auric ‘Thou Kingdom Come’) into the physical body – when this occurs it brings a deep sense of peace, purity of heart and stability and the more spacious thoughts of higher consciousness are able to permeate more and more of daily life.

Energy gathers around the heart centre and it becomes easier to let go of the things bothering or agitating the mind and emotions. Many people are experiencing this already and this will be accelerated at this New Moon 3rd June by the ‘Thy Kingdom Come’ movement of billions of people across the globe praying for peace

At this New Moon at 12 degrees Gemini there is an alignment to Aldebaran one of the four Royal Watcher Stars. You may recall the extraordinary story of Saul who was a persecutor of the followers of Jesus and a military leader of the corrupt Roman State which had just executed him. On the road to Damascus Saul experienced an epiphany which threw him to the ground from his horse and left him blind. His healing three days later describes “scales falling from his eyes”. This is what this New Moon offers, the clarity which flows through the ‘Eye of the Bull’.

The north node is aligned with Juno, Goddess of the Sacred Marriage in watery Cancer. There are many dimensions to understand Juno, and an important one for now is to perceive her as a core energy opening the Seventh Seal of Solomon. As we approach the Mayan Day Out of Time this year it is a year of special significance for the number 7, and also there are important movements of Venus this year which resonate to the number 7 (see below for more on this)

In the past few years you will have heard me say many times that I perceive the opening of the Holy Grail codes through the conjunction of Astraea (Spear of Fire) and Hygiea (Grail Cup). Today however I want to refer to them as the energy of Communion, as an understanding and embodiment of the mysteries of the Eucharist and a profound experience of abundance and togetherness as One Body of life which transcends all religions, nations or even our planetary consciousness. At this New Moon Venus lies in Taurus between these two Goddess asteroids bringing a dancing, creative feminine energy and enhanced experience of Gaia’s profound beauty piercing our collective numbness. Together they are aligned with the Pleaides, the Seven Sisters.

‘To the angel of the church in Ephesus write: These are the words of him who holds the seven stars in his right hand, who walks among the seven golden lampstands:

This is a profound moment in time where the divine feminine really makes her mark, and to illuminate the way in which the Creator unfolds the great mystery I’d like to return to the story of Paul.

Having had his momentous experience, Paul sets out to be a very unexpected but effective apostle of Christ. He was a military man, so no doubt he had a very well thought out plan for the spread of these teachings across the world. Let us just remember for a moment the revolutionary nature of these teachings; every cultural norm from women’s’ position to cleanliness had been challenged by Jesus.

Paul’s plans though were changed after he had a dream and was sent instead by God to Macedonia in Greece. There by the river he met Lydia, a woman of substantial wealth and independence who traded in purple cloth. She, with her sisters regularly worshipped by a river. When Paul told her his story and that of Jesus, she became the first Apostle of the Western world in what must have been a most holy of places (there is still a church there to this day). Lydia’s story really moved me because she embodies so much of what I have come to know through so many years of struggling to embody these incredible Goddess Asteroid energies. Her sovereignty, royalty and wealth are very much resonant with Juno. Her independence and devotion very much resonate with Vesta the Priestess (in Aries at present moving into conjunction with Uranus). Her ability to take the ideas out into the world with such ease and grace really resonates with Pallas Athena (in Libra at the moment). It is not the first time Jesus takes his teachings first to women Apostles – think of Mary Magdalena at the tomb. Its quite astounding that women have been excluded from some areas of ministry for so long – though I am happy to say there is pretty much a gender balance now in the Church of England. When the male and female work together with dignity and respect miracles happen and this it seems from the story of Lydia, was always God’s plan. We have been wondering around in the desert for a long time figuring that out it seems. The Goddess Asteroids are the heavenly bodies which in some mysterious way transmit these ways of being to us.

Time as we know is fractal and holographic, and I feel a great deal may be learnt from how things have unfolded before and these patterns repeat themselves down the ages. Christ consciousness is here among, it is the Communion and feeling of deep belonging in the web of life.

In this next week as part of the Global Thy Kingdom Come movement, I would like to invite you to pray for 5 people every day who you would like to know the compassion and true nature of the Creator; for the scales to fall from their eyes. We can create amazing synergy in this way in the web of life and praying for others is one of the best ways I have experienced of truly connecting with the suffering and experience of humanity, and not getting too caught up in our own emotional turmoil. These prayers may be body prayers or art works, poems or stories.

Above is a painting I did of Lydia’s baptism with her sisters and the second painting below that was swimming in an Iodine infinity pool recently and feeling a complete sense of surrender and the Aqua ray of this feeling of “communion”. I’ve heard of a few others experiencing this Aqua ray recently and I feel it is very much connected to this new level of energy anchoring heaven to earth, all around and everywhere in the web of life. The number of Christ Consciousness is 33, another number which may pop up for you this year. 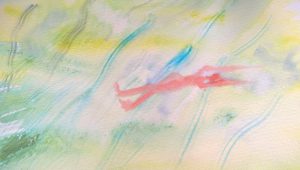 “The White Magnetic Wizard year (begins 27th JULY 2019) and initiates a Great Reorientation of Consciousness. The time is now to Encode the Future and re-enchant the world with memory of unity.

The White Magnetic Wizard opens the Seventh and final Light Gate that activates the interdimensional bridge of Time ship Earth and enters us into the New Sirius Cycle 32 (1.32)

I offer one to one readings, please get in touch at astroalison@gmail.com for more information.