Pre-full moon energies hit a mini-peak this weekend. Eris, again, comes into play which hints that there will be chaos, if even only to the point where people are just thrown for a loop or they find themselves arguing with someone that is arguing the same point. It’s going to ask us to take a moment and listen for we’re going to want to organize our thoughts regarding how we want the future to unfold.

Also, even though there are many configurations showing up for the weekend, the one that stands out is the Uranus Mars, Moon and Eris conjunction. This is what I’ve analyzed below.

As always, conclusion before details.

It would be my take, that as we push through the weekend, people are going to feel motivated into action in a rebellious way. Fortunately, the last degree of Aries directs the energy into looking ahead and planning for the future. This rebellious energy is amplified by Mars, which is again looking towards the future as it transitions into Taurus which should help channel the fight into doing something tangible and with feelings.

Seeing that this conjunction is tied to Pallas, there should be an underlying concept of injustice that drives actions. Also note that the Sun doesn’t aspect the Moon until the full moon on the 19th which is when the leaders should be in direct opposition to the people. Thus, during this weekend, it’s all about the nobility and upper-class participants. Expect energy around banking, courts and legal actions. To go even deeper, we have Saturn participating in a hard aspect which brings up the formalities of government being impacted by the chaos that Eris brings.

Keep in mind that this conjunction starts to fall apart come the full moon on the 19th.

Looking at just one conjunction 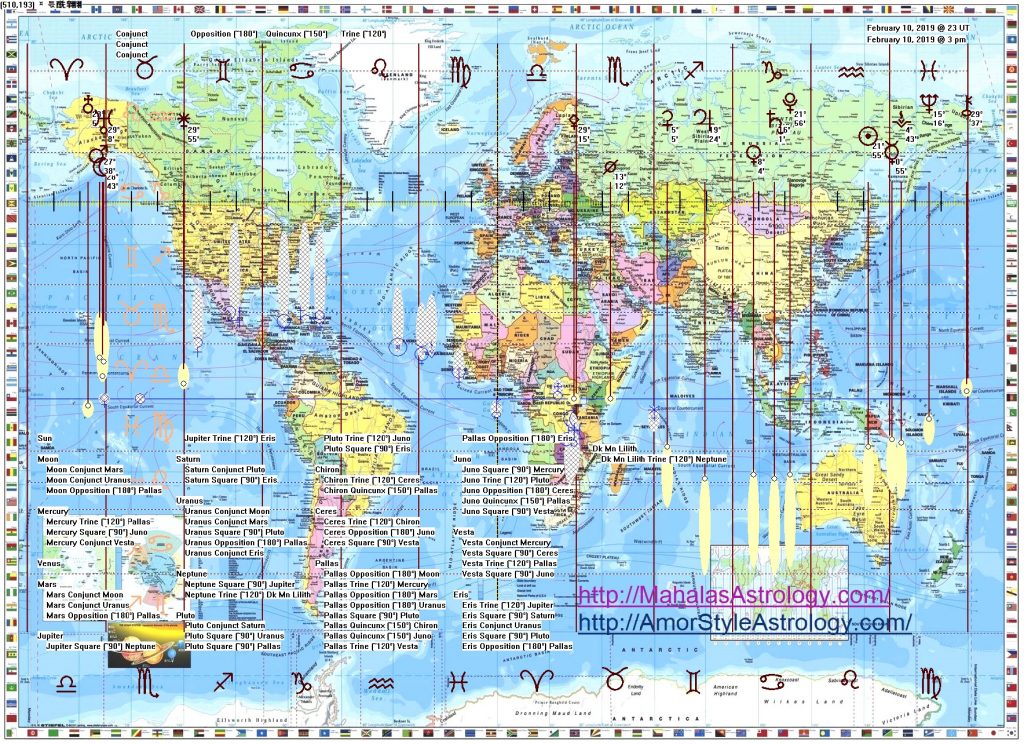 Here we have a conjunction that is playing out near 29 degrees Aries. This is a degree of compassion, understanding and great self-control. It will drive people to show a great deal of concern with regards to what happens in the future.

Keeping this in mind, we have the Moon Mars and Uranus in near perfect alignment. To start with, Mars brings in the confrontation, opposition and assertiveness energy that will accentuate bravery and courage. Uranus represents technology, unexpected changes, electricity and right-wing political ideas. The Moon represents the mood of the people and public opinion. It is a short-term focus, but it is where the public’s attention will be as the weekend unfolds. Lastly, we have Eris which brings in that spirit of trouble through chaos. It’s the energy that makes people feel uncomfortable in a way that friends turn against friends or people argue about things that they are already in agreement about.

Seeing that the Moon moves through this configuration in a day, the timing suggests that the activity, that it should trigger will be unleashed over the weekend. Because it’s tied up with Uranus, we can expect some type of rebellion or movement where people fight for their independence. It is the political right in action or something based on technology that comes into light to aid the cause. Because it’s on 29 degrees Aries, there will be foresight in how this is done for it’s all about the future. The Eris influence shows that it will be people against people.

Now, what is the aspect energy and how does it come into play?

In opposition to this conjunction, we find Pallas is at 29 degrees Libra. This asteroid is nearly at a standstill as it hovers to turn retrograde. It is in Libra which accentuates intellectual characteristics yet it is in discord here suggesting that there is an indecisive tone or non-confrontational aspect about this. The degree suggests that everything will be analyzed and exploited with an effort to avoid confusion. It wants no surprises, but it’s going to have to deal with the chaos that Eris brings

Pallas is linked to change without conflict as it brings up the fight for what is right and just. Being in opposition to the Moon, it should be suggesting that the people need to claim their own personal power. Being in opposition hints that the people are going to have to hold their ground and the battle could really be on an intellectual level rather than physical one. Yet, as we have seen over the last number of months, the Pallas energy been ignited all across Europe and this asteroid is preparing to come back for a second go at it.

We also find a strong square from Pluto that Mars and the Moon just came through, but Uranus and Eris are still in play. Keep in mind that the Pluto Uranus square will hold all through this year into next.

Seeing that the Plutonian energy is coming from Capricorn, we should expect it to be responsible, disciplined and definitely slow and steady. Because it’s square, we expect the people to experience condescending or unforgiving types of situations as the metamorphosis continues. Pluto deals with hidden resources, violence, dictatorships and secret police. It would not be out of the question to hear black helicopters at night, hear about organized crime or find that people are treated like animals rather than humans.

It is worth noting that the opposition point for Pluto is directly over Venezuela. Walking back in time, Pluto’s opposition point started to intersect Venezuela in late 2016. It will be there until Pluto leaves Cancer come mid-2023. The transformation that’s playing out there may be fairly long lasting so I’m sure we’ll have plenty of time to watch it play out.

It is interesting that we also have Saturn in Capricorn square Eris. Knowing that Saturn is all about restriction and restraint, we should expect the people to have limitations placed on them or be subject to regulations, formalities and order. This energy tends to be harder on the sick and old. It also deals with the formal side of government. Seeing that the opposition point is still over Washington DC, it would not be unreasonable to think that the government shutdown will come back in the news to create chaos again (square Eris).

Normally, you would think that a trine with Jupiter will really accentuate the positive aspects of the situation, yet it’s up against Eris rather than Venus. Jupiter is linked to abundance along with judicial and religious systems and ceremonies. Think high courts and nobility linked in with this. The Sagittarius energy is also fiery sign that loves its freedom and not being constrained. On the darker side, we’re going to have to look out for things that are promised, that can’t be delivered or the feeling of having been mislead for a long period of time.

Of course, it’s short. See above.

When we get to the full moon, Neptune once again comes into play. Venus Saturn and Pluto also come together. That should be worth looking into.

Here is a link to the raw data that shows all the aspects that are playing out right now. Raw Data from AstroMap for February 10, 2019 @ 23 UT.