In the past year I have felt through the movements of the Goddess Asteroids the wisdom of older women in the world will become more influential and is being awakened by planetary forces to new levels. My recent journey to Lewis and Harris in the Outer Hebrides, the most North Westerly tip of Europe provided a deepening of this connection to this powerful Goddess energy.

Lewis and Harris are very remote islands and the Christian church has pretty much obliterated the old ways over a few generations. I felt a sense of being there to in some way ‘depolarise’ the religious/goddess divide. In my own valley where I live in Yorkshire I have been experiencing a really different side of Christianity through the Non-Conformist movement that got thousands of working class women and children reading and rights for impoverished mill workers during the Industrial Revolution. It is a real teaching to me how this same revolutionary movement for justice that seemed deeply inspired by the true nature of Jesus could turn into a repressive strangulation of the creative life blood of a whole ancient culture. 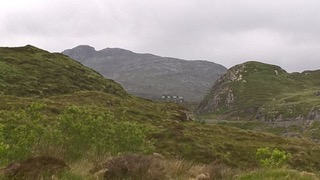 However, the Goddess shows her presence strongly in the landscape. The first image here is of Hag mountain (Photo 1) and the second another special mountain called Sleeping Beauty (Photo 2). Every 19 years the Moon rises and follows the line of her body. The Callanish stone circle lies in the landscape before Sleeping Beauty, part of a huge complex that includes 8 circles. The name Callanish may well derive from ‘Calleaish’ the Celtic name for the Crone woman. Photo 3 is of sunset at Summer Solstice celebration. At this time the Moon was square to the Sun and aligned to the North South axis stones which connect with a central star Sadr of Cygnus the Swan. I could perceive as we drummed to bagpipes and an ancient bone horn that the unique radiation beams of Cygnus were exploding with light inside the body of Gaia. 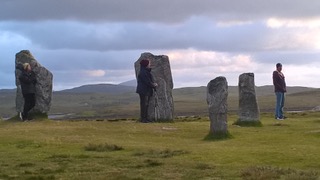 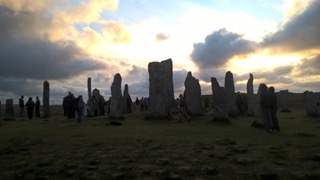 The Moon was also over a womb cairn known locally as the Turtle Stones just outside the main circle. My partner felt very moved to go over there and when we did we met two young French women, also gay like ourselves who had had a pagan wedding and they travel the sacred sites. It was like meeting a reflection of our own souls and we had a deep hug with our sisters. Given they could speak little English and us no French it was remarkable how we established all this within minutes of meeting each other!

Our journey to Harris was of extraordinary beauty. The patterns of Harris Tweed are reputed to have been shared by the Tuatha de Danaan (Star beings) and originally the women wove to long and complex Gaelic songs to remember the sequence of colours. The colours in the landscape were extraordinary in the summer – the bright purple heather and foxgloves, yellow irises, wild water lilies in ponds between the pink, red and black mountains where an eagle led us down a remote road.

Some time ago Jamye Pryce had sent me a Light Language transmission called Elementals which I had the strong urge to listen to on a daily basis and it was awakening a deep primal connection with the Gaelic language. Finally, we visited the Southern Tip of Harris and a small church dedicated to St Clement. There were extraordinary carvings of what appear to be a Mongolian man holding the head of the Holy Grail which connected me immediately to the work of Peter Kingsley called ‘Abaris’. In this book he writes about how the ancient mysteries of sacred geometry were brought to Greece by a Mongolian shaman and Sun God called Abaris. (Photo 4) There are also two Sun Gods meeting and one looks European and the other distinctly Mayan. (Photo 5). There was no information given about these carvings but I was thrilled to notice that a Bardic Poetess called Mairi Nighean Alasdair Rualdh is buried here. There is also reputed to be beneath the sea a solar stone circle at this location. 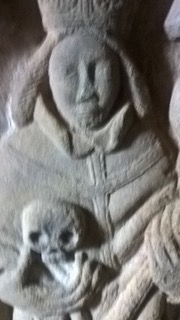 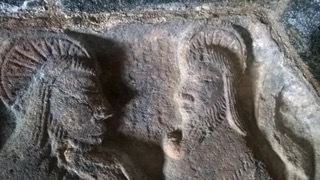 Having been without a computer for a few weeks I was curious to come home and see what was happening with the Goddess Asteroids and particularly with Saturn who is the Crone of our solar system. The last Full Moon 28th June was conjunct Saturn so a perfect illumination of these Crone energies. Saturn/Crone can often appear as a Challenger or Initiator, somebody or a situation which tells us to get our act together NOW!

A number of Goddess Asteroids have moved into new signs. Ceres has just moved into Virgo and this is one of her favourite signs. I have been noticing so much happening around food and ecology for the better – moving towards collectively taking responsibility for our planet and connecting into our Earth’s healing powers through food. I’ve been exploring the Christian mysteries around the Last Supper and one way I’m expressing this is through creating a Middle Eastern Feast to raise money for a local organisation supporting Syrian refugees who have moved into our community. I feel from the news discussion that people are also really understanding the psychological ‘attachment’ harm caused by taking the Mexican children away from their mothers and there is a big backlash against this kind of cruelty. This field of attachment is very much the realm of Ceres.

What Ceres is communicating to me is that this sharing of food in the family and community is incredibly important to create bonds of light between us and a sense of being nourished and cared for. It is vitally important we do all we can to bring peace in the Middle East and all refugee situations. Ceres is in a perfect Earth trine to Uranus so we may experience some big breakthroughs on the ‘daring to care’ front. Uranus in a challenging square to Mars may also kick start us into action where in the past we may have been fast asleep.

Astraea, Chiron and Hygeia have moved into Aries beginning a whole new cycle. The Sacred Artists and healers are working their magic to attune the world to higher and higher frequencies and to awaken our DNA. Chiron the Wounded Healer asks us to embrace the totality of our experience as human beings and to use our wounds to open our hearts with compassion to those who have the same issues as ourselves. They are never far away. I feel ever more convinced that these asteroids are signalling the awakening of the Holy Grail energies within the land and the rising of a new phase of Christ Consciousness.

Vesta is crossing the Galactic Centre and her transmission is about owning our spiritual path, to journey inward to find our strength rather than looking to priests or gurus. This archetype has great power at present to channel from the Galactic Centre, to hear the song of evolution and embody it.

I will be co-facilitating a retreat on the Isle of Lewis, Outer Hebrides Scotland for Samhain connecting to the Crone energies from 26th October to 2nd November 2018. Please email me at astroalison@gmail.com if you are interested in finding out more about it.

I do one to one chart readings which include the Goddess Asteroids. It is a deep soul reading that can answer many different questions. Please email for more information about this.

If you live nearby here is a Facebook link to the Middle Eastern Vegetarian/Vegan Mezze Feast. Tickets are selling fast so get in touch. Its on Sunday 9th September from 1-3pm at Hope Baptist Church, Hebden Bridge. A suggested donation of £15 is requested with funds going to Together We Grow in Rochdale. https://www.facebook.com/events/194259604626373/

The Elemental Light Language is available from www.jamyepryce.com

Sadr (Gamma Cygni), the constellation’s second brightest star, is a blue-white supergiant (F8 lab) found 1,800 light years from our solar system with a visual magnitude of 2.23. It is estimated to be only 12 million years old, and has around 150 times the Sun’s radius, and twelve times its mass. Sadr forms the heart of the Northern Cross, and its name comes from the Arabic word for “the chest”.