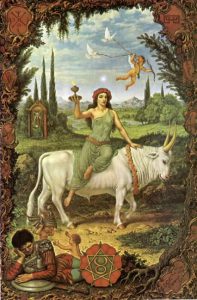 The Blue Moon on the 31st March is the second of this year and also falls the day after Good Friday and Passover. This is a beautiful event in the heavens marking the possibilities for a resurrection for humanity.

Firstly, the Blue Moon has a cardinal cross pattern which is a powerful transforming aspect. The horizontal arms of the cross are the Moon in Libra crossing to Sun and Mercury in Aries. The Spring Equinox is upon us, the seasons are changing but it feels this year a much deeper level of alchemical transmutation is taking place too. The top of the cross aligns to Sirius which is assisting this transition through sacred geometry in light.

At present, Vesta the Sacred priestess is crossing the Galactic Center and ahead of her are Mars and Saturn in Capricorn forming the base of the cross. This is about the control and structuring of life force energy. How will we create and sculpt our lives and creative forms as the new energies pulse into our atmosphere? The practical and grounding energies of Capricorn can be very useful at these times of major change. In the past few weeks I’ve seen quite a few pictures of goats clinging precariously onto cliffs – they are incredible climbers in seemingly the most impossible and hostile of environments.

What is really lighting me up at this Blue Moon is the line up of planets/asteroids in Pisces – Chiron the Wounded Healer showing us that we only get those breakthrough’s of light when we can look at our own suffering with love, become more human because of it. Juno the Goddess of the Sacred Marriage and mistress of alchemy is now joined with boundless Neptune whose high frequencies are purifying further our physical, emotional and mental bodies. Neptune can also make us a bit dizzy and dreamy. Its’ as if we are on an ‘albedo’ long spin in the cosmic washing machine. It is an excellent time for a physical detox – you may feel forced to do one through feeling unwell with toxic overload.

Hygeia and Astraea then follow closely behind. I have visioned these three walking in a Triangle with Hygeia holding the Chalice and Astraea the Spear which drips blood. This symbolizes the magical fusion of water and fire, female and male. This image of the Holy Grail appears in the story of Parsifal who sees this spectacle when he stumbles upon the Fisher King’s Castle. The first known version I recently discovered was by a Persian astrologer called Flegatanis and was transferred to the Western Mystery tradition by the Knights Templars. Fleganatis was a descendant of King Solomon on the matriarchal side. It is not recorded exactly what he saw in the heavens, but it is interested that it was a star transmission that things were about to change.

The Holy Grail is generally accepted as bringing health and immortality to those it touches. It can be seen as many things including a stone, a platter, a chalice or a spear. My feeling is in these Aquarian times we need to see our own bodies as the Holy Grail, capable of attaining immortal life through the emergent light body. Emerald and moldavite are the stones most connected with the many legends so it may be helpful to work with these to anchor and open the energies.

Juno completes the triangle with her headdress of Peacock Feathers representing sovereignty. It is sometimes useful to think beyond the Roman archetypes; they are central to our Western ways of evolving but there are other equally powerful archetypes we can tune into further back and across cultures. For example Hygiea’s symbol is the Caduceus. We could associate this with Isis as the alchemist who makes Osiris whole for example.

In the past year I have felt drawn to explore Christianity and attending church each week is giving me a much greater insight into the alchemical teachings of Christ and the awakening of the Light body.

The Transfiguration is one of the first times we glimpse that Jesus’s powers of healing are closely connected to light. He already knows he is going to die and is building his light body, with the assistance of Mary his mother, Mary Magdalene and his disciples in preparation for death and resurrection. It feels important to say this as the light body awakens in groups much more powerfully than single, isolated individuals. In following this path of death, Jesus chooses to ‘transfigure’ the shadow of the collective out of his love for humanity. Its’ astounding the more you contemplate it. One thing that is clear is that the light body cellular experience comes from this devotion to humanity, the willingness to take on the shadow of the collective.

The Last Supper and Holy Communion give us further insights. The blessing of food and wine (or water) is what creates light within the food and our bodies. The mysteries that have unfolded the past 5 years through Ceres are all about food – not just what we’re are eating but how we feel about our own body and food.

Food also has a special ability to help us overcome fear of others.  There was a program on recently about how the BBC World Service have a ‘bring and share’ lunch every week, with a representative of every country in the world. The buzz around this weekly event was amazing, and so much love and curiosity about other cultures and religions.

I feel food is going to be central in the awakening of humanity. There is however something even more important in the Holy Communion rite and that is that we are one human organism. When we truly feel this love for each other all violence and wars will cease.

I feel that the children and young people of America protesting against guns is a pure reflection of this beautiful awakening energy. As Martin Luther King’s Jnr grand daughter Yolanda Renne King says so eloquently “I have a dream that enough is enough. And this should be a gun free world, period”.

Venus has just entered Taurus, and as the ruler of love, plants and the heart centered color of green, this is wonderful news. In this position Venus is all about love and peace. The Cosmos is definitely lining up with Yolanda. In this image by Johfra, Venus shines as the Morning Star above Isis who holds the inner mysteries and Europa representing the world of plants. The duality of Gemini has been resolved by Eros who leads the two doves. Mars the god of war has fallen fast asleep.

I offer one to one chart readings, so please do get in touch if you would like some unique insights into your life. Email me at astroalison@gmail.com for more information.

I am co-facilitating a women’s retreat called Return to Innocence of the Isle of Lewis in the Outer Hebrides. There is a wonderful stone circle called Callanish where we will be visiting for summer solstice and many other places including a hermitage of Black Nuns who used to live in a remote part of the island. There are a few places left so please get in touch if you feel called to this wilderness island where the land itself feels untouched and innocent.