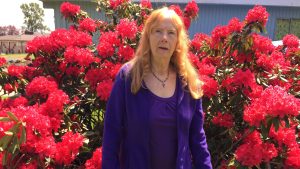 The full moon on May 10 was a very powerful one. It was the climax of the Mercury/Uranus conjunction that started on April 28, 2017.  The period of time from April 28 to May 10 was very challenging because of that conjunction. Mercury rules transportation and communication and Uranus rules sudden unexpected events. How did you experience this past period of time up to the full moon? Did it feel like Mercury was still retrograde? A Mercury/Uranus conjunction makes it feel like Mercury is still retrograde. This caused lots of computer problems, phone challenges, and lots of accidents.

Were you very agitated or angry about something or someone during this past full moon, or did you have major physical symptoms because of the increase in energy?   Or were you one of the lucky ones that got through this period of time experiencing peace and love? I experienced the physical symptoms, and they were very intense. This energy is over now because the climax occurred at the full moon, although we still have to deal with the Saturn/Uranus trine which will be in effect until the end of this month. Saturn rules the old and Uranus rules the new which means out with the old and in with the new.

Whenever high energy, like the solar wind comes to Earth, people seem to get a little agitated. This is because the solar energy hits our magnetic field and those that cannot handle this high energy go a little crazy. We are all connected to Earth’s magnetic field, and in that sense we are all one. Maybe it’s time to start manifesting this unity consciousness.

Trump has been a real challenge to the world so maybe we could change our perception of him and see him as creating unity consciousness. He is creating this because so many people are joining together against him.  He is bringing many people together on a negative level, and they are saying “enough is enough”, we want our freedom and we do not want to be controlled anymore. He is like Shiva, the destroyer who comes to destroy things so a new reality can be created. Out of chaos comes a new creation. Incidentally, Carl Calleman says that a new wave of energy starts on May 24 when we move into a new wave on the 9th level of consciousness. (That level is Christ Consciousness).

In my last article I mentioned there would be lots of lawsuits and legal action against Trump during this time period, and that is coming true.  I am referring to what is going on in our government here in the United States and the investigation of Trump on money laundering and the charge that Russia hacked our election. I heard that two summons have been issued to Trump already. One of them is from New York and the other one is from Virginia. This is just the beginning. There has been an investigation going on in the FBI about the Russian connection to our election for months.

Sally Yates, the former acting attorney general of the USA, told our senators on May 8 about how she warned Trump not to hire Michael Flynn because of his illegal activities. Lots of action and upsets have occurred because of her testimony. The next thing that happened was Trump fired James Comey, the head of the FBI. He was in charge of the investigation of Trump for illegal activity. Now things have moved into fast-speed. What will happen next in this big drama?

Trump does not have a very good chart right now because he is a Gemini and Mars is moving through that sign. Mars was on 13 degrees Gemini on this past full moon and Trump’s Uranus is on 17 degrees Gemini. His Uranus was within orb when he unexpectedly fired James Comey although that energy will still be in effect until Mather’s Day on May 14th.  What else will he do with this unexpected energy?

The next major aspect in his chart will be when Mars conjuncts his north node on May 19-20. His node is his destiny. What major event will happen around that time? It is a war-like energy which means he might start another war, maybe in Afghanistan or Korea, or he may be in danger himself. Trump’s north node is on 20 degrees Gemini and Mars in the United States birth chart is on 20 degrees Gemini. We will see what happens with that powerful aspect. The next major aspect is when Mars conjuncts his sun on May 22-23.

Now let’s talk about Earth changes. There were a lot of Earth changes this past month like storms all over the world. In fact we had a huge storm here in the Pacific Northwest on Thursday May 4 that lasted from 3:00 pm until 3:00 am. It ended with a tremendous loud blast of thunder. That blast woke me up and I bet it woke up a lot of other people. We also had another event across our mountains where the Hanford Nuclear plant is located. A tunnel collapsed there and this could be a dangerous situation if it leaks radiation. They have said it is fixed. I sure hope so. We also had a couple of small earthquakes in our area.

I did mention in my last article that there would be a lot of storms, especially across the Midwest. This did happen and there will be more large storms in that same area. We are still in the year of the Blue Storm in the Dreamspell Calendar and that energy will continue until July 25, 2017. The sun moves into Gemini on May 20 and the Midwest will be affected by the sun for another month. Mars moves out of Gemini on June 4, 2017. Then the water energy of Cancer will become dominant and this will bring storms and flooding to the East Coast. Pluto is also being activated now which could also bring storms to the East Coast.

Our thoughts are electrical and our emotions are magnetic. We create with our thoughts and manifest with our emotions. We need to have our hearts open to manifest Christ Consciousness. Think with your heart. Love with your heart. Our heart is our magnetic center and your heart is the most powerful organ in your body. It also connects to Earth’s magnetic field and by us all connecting to this field we all become united in love.       So Be It!      All is well in my world and hope it is the same in your world.

Love and light to everyone!  Mahala Gayle

I would like to thank all of you for supporting me over the years. It has been appreciated. We now have the software to start doing videos. Thank you very much.

My son is still doing Edgar Cayce past life readings for a donation of $30. If you are interested in receiving one, please check out the link on the front page of my website to Edgar Cayce Reports or send him an email with your birth info. If you have ordered one and have not received it please check your junk mail because sometimes they appear in that file. My son does the charts within 48 hours so if you have not received yours please send him an email at AmorStyleYoga@hotmail.com . He also does wonderful Tarot Card Readings. Smile and Enjoy Life.