UPDATE: When you perform a Tarot reading for someone or about something, you clear (shuffle) the cards, state the question that you want clarification about and then you draw cards. The whole idea is to interpret what the subconscious tells you in a pure, ego free, way.

This rule is fundamentally broken with regards to the intent behind this magazine. The magazine intentionally puts together symbolism to tell you what they predict will happen or what they have outlined for the year. This year, they are feeding the deception by playing the role of the divine. They choose the cards they wanted you to see. They even designed the deck to have the appropriate images.

Thus, use your own decrement. I see this as man telling man what will happen, thus they only way they can get it correct is to fund and implement it themselves.

Some of you may be aware that the globalists that run the Economist magazine issue a visual projection regarding what they think is going to happen for each upcoming year. These covers always require interpretation based on the occult symbolism that they use.

This year, the symbolism is straight from their own private tarot deck! 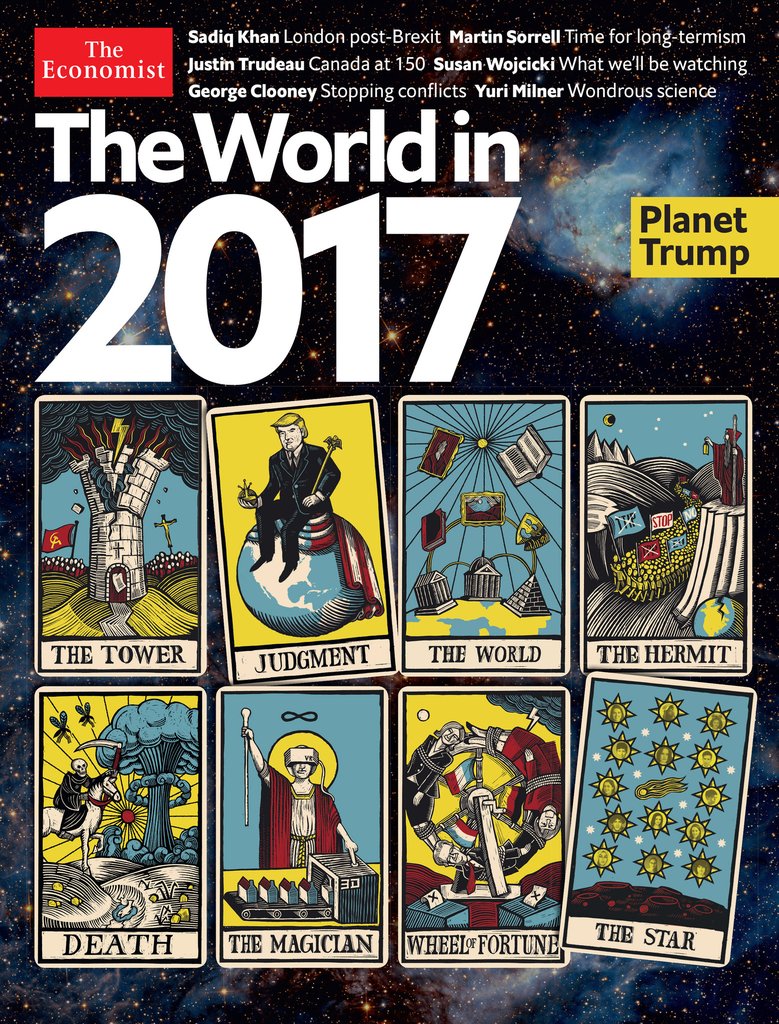 What follows is my interpretation of the spread. The information may seem a little hap-hazard. I just wrote down what came to me as it came to me.

There are 8 cards, indicating that they come from a position of authority or management. Eight also represents the power that springs from within that enables the accomplishment of goals.

All the cards are from the Major Arcana which represents ‘what happens to us’ rather than ‘what we do’.

All the cards are upright indicating that the standard meanings should apply – anyone can look up the meanings online and draw their own conclusions. Yes, a couple cards are askew, but I don’t see any reason to ‘flip’ the meanings.

Normally, when getting a reading there needs to be a statement regarding why the cards are being drawn. In this case, because the economist magazine is presented from the elites and the cover always shows what they intend to see unfold during the calendar year, we can safely assume that the cards are here to show the non-elites what will transpire.

Typically, the first card represents the tone of the reading. Because the magazine is English, we can assume left to right, top to bottom reading. Thus, the tone is set by The Tower.

The Tower represents structures that have been built that need to come down. At its heart is “A New Order”. This is a card of upheaval and the only trump card in the deck that deals specifically with worldly structures. It is a very powerful card of change that is rooted in man not following the rules of the gods. It is the card of punishment for stepping out of bounds. It is the burn that man feels from both fire and ice. Institutions are destroyed and will never be the same again. The lifestyle that man has felt will be changed forever. It also represents the freedom that we feel when we’re released from a false belief system.

Typically, the cards that follow have supportive roles on the theme that give details and the last card might be a final outcome. Thus, what supports this drastic change?

Judgment! This card signifies a completion and new lease on life. It is the day of reckoning. It is the completion of the karmic cycle. Depending on the choices that we have made in life, it is now time to reap the positive or negative rewards. It represents the opportunity that is at hand where the slate can be wiped clean for a new start. In the end, this card teaches us that we are ultimately responsible for our own actions and that we cannot get away from the consequences. From the artist, looks like the new ruler is Trump and he holds the timing in his hand.

The World. This is the realization of a goal. It is the ultimate conclusion of the fool’s journey, thus the ultimate start of a new journey. This card is all about change and the integration of completeness. It may even hint at self-realization. It signifies a unification of understanding within ourselves, a balance, that we feel as harmonious or success. From the artist, they seem to connect Africa to Europe to America. The items in the sky seem to represent knowledge, history, art, religion, people. The World generally represents all four elements of our experience.

The Hermit. This card represents the wisdom that comes in time, can be thought of as father time. Typically plays out as the wise of philosopher that is able to stand on his own. It may represent that we are on our own or that we stand in darkness only seeing a short distance ahead of us. The Hermit teaches us that everything comes in its own time and it cannot be forced. It is having the will to wait in silence until the time is right. From the artist, it looks like there are global initiatives that are not finding this time to be correct. The earth is not unified (cracked). There is a movement at foot.

Death. This is the card of transformation. Seated on a horse, it represents powerful sweeping changes that will not be able to be reversed. This card typically has naked people on it signifying that you will not be able to take your worldly things with you through this transition. It is the type of change that people fear, but generally leads to greener pastures. It reaffirms the original card where we need to let something die before we can start something new. The level of pain associated with the change is directly related to the amount of resistance to it.

The magician. This card is the messenger of the gods that is here to instruct us that there is a choice to make to start our journey. It represents a raw energy flow that could have an infinite number of outcomes. Inwardly, it represents the conscious – subconscious link that is the root of power; if we so choose to bring it in play. This is a ‘clean slate’ card for the reader is the one that has to choose what the next adventure is. The magician plays the role of being the trickster, or the one that shows you your options with no regard to the karmic consequences. Only a fool would blindly listen to the magician without thoroughly thinking and feeling out where you choice will take you. From the artist, we again see the four elements (represented in houses) that we can choose from.

Wheel of Fortune. This is the card of fate and luck in a situation of never endings changes in circumstance. It is the one card in the deck stands above the rest in that it cannot be challenged. It represents destiny. It is the opposite of the feather blowing in the breeze – you were put in this situation. It is by grand design, yet it is a turn of events. Typically, this card shows us that life is constantly in motion and without that motion, things would get static and we would cease to grow. From the artist, we see that different countries are bound to the wheel suggesting that their situations will change. It is their fate.

The final card typically expresses the final outcome or the perceived goal.

The Star. This is the card of eternal hope. It is the belief in a better future. The star connects us to that part of ourselves that never gives up and is faithful. It is that knowing that anything is possible as long as we have hope. It is a bright card, in a dark situation. It is the inspiration that keeps us on the path. This card brings a new sense of purpose and belief in ourselves. It encourages you to follow your dreams and to not doubt. The Star promises the release from past difficulties and traumas. From the artist, we see what could be faces of hope and a comet to amplify its power.

Reading from left to right, top to bottom, long lasting institutions will come crashing down at the hand or the new ruler that plays the role of judge. The entire world is affected and what was planned now sits in waiting for the right time. The transitions that we will be going through will not be reversible and there are infinite possibilities for our next choice. There are still actions to transpire around the world that will radically change countries positions, and in the end, the energy that keeps us going will be a light in the darkness.

It is a reading of hope through a change in fortune.

Things that stand out to me:

These are cards of actions that will happen to us.

These are powerful inner change cards that affect the spirit of people (mankind).

It feels like the magazine has stepped back or retreated.

I can’t wait to read other people’s interpretations of this spread!