In the emerging energies following the Solar and Lunar eclipses both Hygeia and Astraea seemed very important. In this blog I shall focus on Hygeia but keep an eye out on Planet Alert for a further blog about Astraea. My research into Hygeia has revealed that the day I am writing this is her birthday as she was discovered 12th April 1849 in Naples by Annibale de Gasparis who discovered Nine asteroids. 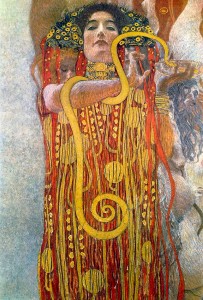 Hygeia is in the main asteroid belt and is the fourth largest asteroid, however because of her distance from the sun and the dark matter of her mantle she is very hard to see. This seems very apt for a Goddess of Healing Dreams that she has herself a certain intangible quality. Also she has a very low density more like Jupiter than a rocky planet. She rotates very slowly every 27 hours and possibly in a retrograde direction which again feels important that her energy is very much about the healing power of rest and slowing down.

Hygeia is one of the daughters of Asclepius the Father of Medicine who learnt his trade from Chiron. The word ‘ hygiene’ comes from Hygeia. She has a sister Panacea who is also an asteroid body and together they are the breasts of Rhea the Earth Mother. In this sense Hygeia could be said to have a strong connection to the breasts and their healing powers through erotic love and nurturing milk. As women we may be aware of this special power of healing when we hold a child, animal or a lover to our breast. In Greece Hygeia had healing temples where people would come with their ailments and problems. Hygeia and her priestesses would provide comfort and a place to rest deeply and it was through dreams that people found their healing.

Hygeia has been present on my Solar Fire software for a while but not really calling me strongly in chart readings. I had done a group of children’s charts in Steiner School about a year ago and felt more that Hygeia was an emerging energy as she was very strongly placed in their charts. However following the equinox eclipse she was making herself very known as if awakening from a deep sleep herself.

In the days following the Total Solar Eclipse the first Goddess chart reading I did was for a guy in Portland who had some very interesting Aquarian Goddess influences. That night as I slept though Hygeia came to me to say I had missed her (she was in the hidden 12th house) and that she was aligned to the Great Central Sun Sirius in this particular chart. On awakening I checked and so it was, and the great thing is Hygeia is now once again in Cancer and approaching conjunction with Sirius again.  Hygeia works through dreams and invisible forces and it feel very much to me that she is communicating an important message from the Greater Central Sun which is as simple as ‘allow yourself to rest and heal, get off the conveyor belt of doing, trying so hard and trust that all is unfolding’. For many of us this may mean some adjustments in what we feel we need to have a happy life and paring back to what we truly value. However it is also true that creative energy can generate just as much abundance as the work, work, work philosophy. Hygeia also has a strong connection to Alcyone as Venus was aligned to this star on the day she was discovered. Hygeia very much seems to embody an important evolutionary impulse from both Sirius and Alcyone.

The Sabian Symbol for 6 degrees Libra where Hygeia was discovered is “A Man Watches His Ideals Taking A Concrete Form Before His Inner Vision: the need to visualise clearly one’s dreams or ideals in order to make them truly effectual. Over the period of the past 6 months one of my groups has been working creatively with the Nine Ladies of the Lake of Celtic mythology in the legends of King Arthur. These Ladies are often invisible forces, often maligned and misunderstood by the patriarchy but they are the main protagonists and catalysts for the unfolding events in the world of men. During this time Nine holes of Dark Matter were found in our solar system and this was another reminder that it is invisible forces that shape the unfolding story and we would be wise to pay attention to these.

I had many synchronistic connections with Hygeia following the latest eclipses including having the same dream as my partner at the same time where we were feasting with Hygeia! On the other side of the world in America it seems Hygeia was very active too. Whilst I was doing the chart reading in the UK bees were starting to accumulate in the front door cove of the guy I was reading for, hundreds of them. This was also the same day there was a massive solar flare aimed at Earth which caused a lot of disruption in the electromagnetic field (26/03/15). From the description a Queen Bee may well have taken up home with him and his wife right outside the front door.  Hygeia it seems may well carry the energy of bees and one element which definitely seems to have changed since the eclipse is that people seem to be communicating much more psychically with each other as if we are tuned in on an invisible level. I would be interested to hear if anybody else is experiencing an increase in this type of telepathic communication, which the bees do so effortlessly through their smells and dances? If you didn’t read my blog on mushrooms go back and have a look because mushrooms seem very much the bees of the plant kingdom.

Hygeia as a healing goddess of dreams seems to me very much connected with the deeper and invisible functions of health. I’ve been really convinced in the last few years that attuning to the day and night cycle is a vital first step in reconnecting to cosmic energies and the natural vitality that comes from this. Sleep is of vital importance in healing the body and mind.

Hygeia in the birth chart indicates healing abilities especially with dreams, shamanism and certain kinds of creativity which tap into the unconscious. Hygeia seems to me very much connected with the Virgo Pisces axis. Virgo is the Goddess and often associated with health and Pisces cosmic consciousness and the realm of dreams.  Hygeia in aspect to Neptune, Pluto and in the 12th house may bring particularly deep insights. Her nodes were in fact running from Pisces to Virgo at her birth time. You can contact Hygeia easily by entering her temple before you go to sleep and asking her for healing.

If you would like to go deeper into your chart with a Goddess asteroid and centaur reading please get in touch at astroalison@gmail.com. For those of you in the UK we have some exciting Chiron workshops with the In Harmony with Horses herd in the Pennines. Check out www.inharmonywithhorses.co.uk for more details.