Happy Thanksgiving to all the American readers! 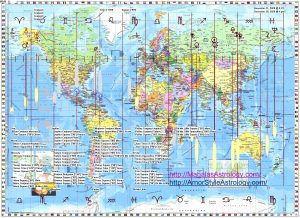 At Christmas 2019 there was a wonderful documentary on the BBC following the pathway of the Magi across the Sinai desert as they followed the Star of Bethlehem. The documentary, using Astronomical software showed that the most likely explanation for the phenomena was a Jupiter Saturn conjunction which occurred in the year Jesus was born. Intuitively I jumped on my own software to find out when the next one would be and was delighted to find it is this year, and falls at the Winter Solstice through to Christmas 20-26th December.

Shortly afterwards my journey of understanding the Magi deepened when I came across a book house sitting The Magi by Adrian G. Gilbert. It refers to the work of the Russian mystics G.I Gurdjieff and P.D Oupensky who undertook a long journey to find out who the Magi were as a secret brotherhood from Mesopotamia, Persia and Egypt. Sullivan adds to this astronomical picture to come up with some astounding discoveries of Earth Star maps and sacred sites in the Middle East. Gurdjieff and Oupensky’s work has enjoyed a revival in the West in more open minded Christian circles in recent years and was simplified into the form of the Enneagram, a 9 pointed star. It’s a great system if you have never explored it.

What is so interesting about this Star of Bethlehem for me is that the meaning of it has been revealed over quite a long period of time, a year, and also very much connected to Sacred Geometry, although I also have a very close devotional relationship with Yeshua and Mary Magdalene too.

One of my great epiphanies of 2020 is the work of Nassim Harrieman who has discovered the geometric secret at the heart of creation. He set up the Resonance Science Foundation and some 50,000 ordinary people i.e. not scientists, which have done their free course just in this year. In the final module connections are made to many ancient forms of wisdom such as the I Ching from which has emerged the Gene Keys and Human Design, the Qabalah and the Holy Grail. One fascinating fact is that Harrieman really struggled for his work to be validated as it challenges many previously thought truths in the scientific establishment. Finally though, it was accepted for publication by a scientific journal on the 21st December 2012.

In the Autumn of 2020, I signed up to another course with the Resonance Science Foundation with Jonathan Quinton called Universal Order. In this course you learn to draw geometrical shapes and as Jonathan puts it program them into the occipital part of your brain as the harmonious order of creation. Quite unexpectedly Jonathan has a fantastic section of the Sacred Geometry of the patterns Jupiter and Saturn create together allowing me an important insight I’m sure the Magi had.

In a nutshell the journey of these 2 planets together form not one but two star patterns in the heavens, so no wonder the Magi were ignited by them. Jupiter has an orbit of 12 years and Saturn 30 rounded off.

If you track Jupiter and Saturn every 12 years, Jupiter completes an orbit around the Sun and Saturn is marked at the same time in its position. After 60 years Saturn returns to the same place as Jupiter and they have created a perfect Pentagon or 5-pointed star within the 360-degree circle. This will be resonant with Venus who also created a 5-pointed star every 8 years. 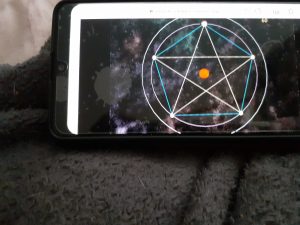 Then if you track Jupiter and Saturn every 10 years they first come into opposition and then after another 10 years conjunction. In this pattern observed over 60 years they form a 6-pointed star. 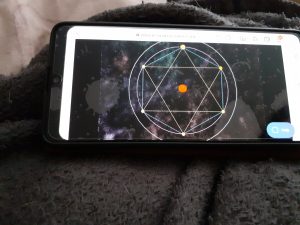 So, if the Saturn Jupiter conjunction is every 20 year how then do we know that this one is of any special significance?

Firstly, the timing of it falling at Winter Solstice through to Christmas. This also suggests healing and reconciliation between the Indigenous religions and Christianity.

Secondly it falls at 0 degrees Aquarius and the configurations move from Earth into Air in another 800-year cycle. As we are entering this Aeon now this is a powerful beginning of Pallas Athena, Saturn and Jupiter moving out of Capricorn and into Aquarius where the new structures will be created. The consciousness of Sacred Geometry I feel brings an opportunity to create light, clean forms uncorrupted by religions and other distortions in the human field.

As we are going to be the Co- Creators of these new forms what should we be aiming for?

The Aquarian energy is known as the Great Equalizer. It brings non-hierarchical, self organizing structures much like nature. Nobody has to stand and command the oak tree to grow. In the same way we too have all we need to know for our unique genius self-encoded in us, and this genius self will bring the perfect gifts and service to the whole. Hierarchical structures will gradually dissolve to be replaced by more localized, group and community-based leadership styles.

We are on the path to equality of men and women and racial equality. Of course, there will be those who fight against this because they enjoy the privilege of oppressive systems and will want to keep things as they are. In the end though Divine Justice will prevail.

The gender roles will become increasingly blurred, there is evidence for this in our culture. Equality for the LGBTQ communities will continue to improve.

Many astrologers including myself are tuned into the Divine Feminine energy flowing into the planet. Its slowing us down, making us more contemplative and tuned into natural cycles of time. Its helping us to become more right brained, imaginative and in our creative power whilst using the left brain logic to support life on planet Earth, rather than destroy it.

In the summer I was working on some watercolor paintings allowing them to emerge from black paper. This one below I called ‘The Magdalena Magi following the Star of Bethlehem on their White Buffalo’. 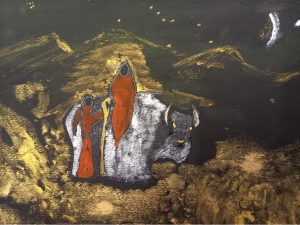 In the second painting ‘Turtle Follows the Star of Bethlehem’ emerged from my Universal Order course. I had drawn the basic sacred shapes the Triangle, Square and Pentagon and then started to paint. At first, I was thinking of an alchemical furnace at the center and then suddenly a Turtle emerged. This was wonderful because it reminded me of the story of how the I Ching was discovered by Turtle revealing the sacred patterns of creation on its back. From here emerged the 64 Hexagrams which we have come to understand are the same coding as our genetic makeup. Human Design and the Gene Keys are both incredible systems that awaken our very DNA to the vibrant wealth of creation within us. 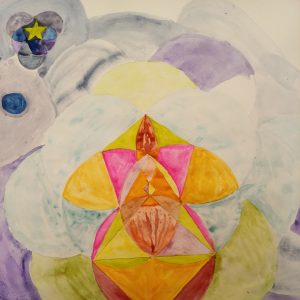 The final thing that convinced me of the importance of this Star of Bethlehem was when I read Jamye Price’s November 2020 newsletter and her vision of the Trumpet of Gabriel felt like the final piece of information to bring it all together. Gabriel of course announces the birth of Christ. It’s very interesting that it has come to her also in a scientific way connected with sacred geometry. Have a read of her experiences which really blew my mind and I hope yours will too because this is very exciting news.

Sign up to the Unified Science course here for a better understanding of it all https://www.resonancescience.org/

I offer one to one personal Goddess Asteroid readings. For further information on these please email me at astroalison@gmail.com