A few months ago I was impressed that I needed to write about the planets as if they where notes in a celestial musical cord. To help with this process, I modified my AstroMap software to help me find the cords so that they could be interpreted.

The basic idea behind the building of the cords is that conjunctions are considered the area of focus or the central location of the note. From that point, any planet that aspects the conjunction is considered an accent to the major focus and is included in the grouping that defines the cord. All other multi-planet aspects that do not directly interact with a conjunction are listed afterwards so as to show the side stories, or side notes, that are playing out.

With this in mind, the target for this first report is the New Moon on January 5-6th of 2019. And, as always, I provide the summary first, followed by the computer-generated data that was used to make the interpretation. 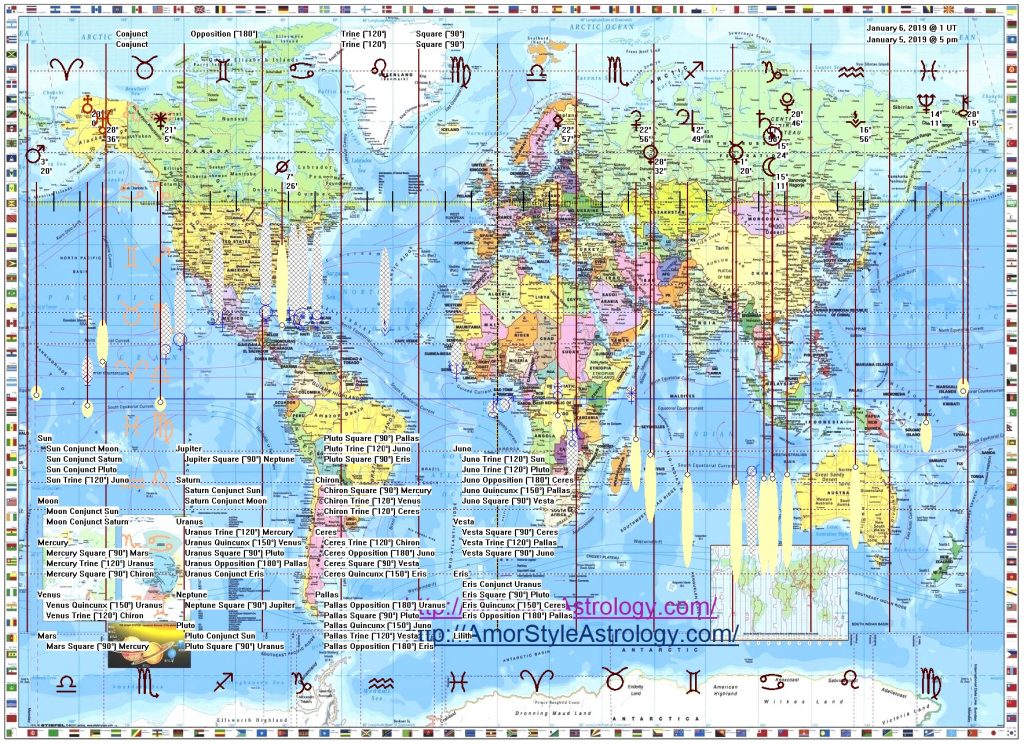 If you look at the map, you’ll see that Mercury is also in Capricorn and Mars is in Aries. Everything here seems to be leaning towards square agitation between Capricorn and Aries.

Because we are dealing with the Sun, we’re talking about national leaders and people in power. All those people in positions of power will be on edge. From the public’s point of view, we’re going to see bad Capricorn behavior from them which will be condescending and unforgiving. They may act irresponsibly, without discipline or self-control. I would expect the leaders to use any form of delay and restriction that they can get out of Saturn before that conjunction fully breaks down.

Why is this? Well, Pluto brings up what is hidden. It divulges secrets. It is the planet that brings transformation through detection. Pluto is also supported by Juno through its trine from Taurus. Juno is a softer feminine energy that is all about faithfulness and loyalty. It brings things together with the sole purpose of working through experiences. Juno in a practical asteroid in a grounded sign which will amplify the manifestation abilities that the Pluto energy brings in for the leaders to experience.

Looking at where the real power comes from to help with the changes, we look towards Aries. This sign is the courageous, confident fighter that’s going to get things done. This brings that explosive, rebellious, aspect of Uranus which is all about riots, upheaval, unruly events and the support of Right-Wing political ideal into focus. An added complication is that Uranus will be standing still in order to move direct between Jan 2nd to 10th. The focus of 28.36 degrees Aries will bring a strong focus into the future regarding what’s coming and where things need to go. Eris, is the spirit of trouble through chaos. It goes to great lengths to make sure everyone is uncomfortable with the situation. It accentuates lawlessness, disputes, forgetfulness, deceit and just about everything that people bicker or squabble about.

To add to this, we have Pallas in Libra which is going to want to force balance and harmony into the equation, yet, this is a square which can bring out the indecisive energy which limits the overall impact. Keep in mind that this is the female warrior which is more cerebral than Mars. This is the asteroid that is linked to knowing what’s right without having to be told and she’s coming into the equation to force the fight for justice.

After the Sun Pluto conjunction on the 11th, Mercury compresses to Saturn which should amplify the restrictions on communication bring up an environment where the people will be left in the dark as to what is exactly happening for a short period of time. Shortly thereafter, the Moon conjuncts Mars in Aries hinting that the people will be willing to fight again if only for a moment (Wed the 12th). By the 18th, Mercury conjuncts Pluto suggesting that what has been transformed will be in the news or front and center so that it can be talked about.

This is a relatively short situation that should play out through January.

The Uranus and Eris conjunction has been in play for a long time now. The perfect conjunction transpired in March of 2017 and has been waning ever since. A key thing to notice for this Full Moon is that both Uranus and Eris are standing still preparing to turn direct again. From Uranus, the degree that it’s turning on represents a time of deeper contemplation that drives people to look further towards the future. From Eris, it’s on a degree which highlights anything government related. Being an asteroid of confusion, disarray and discord, we might expect the government to be subject to this devious energy for a while longer.

For the details, Uranus is about scientific discoveries, inventions, explosions, anarchy, rebellion, unrest and right-wing political ideals, expect all this to be amplified and talked about. Mercury has just entered Capricorn which will shine it’s influence of communication towards Uranus in a favorable way from the 1st right up to the point of the New Moon.

Pallas, directly opposing both Uranus and Eris, is linked to legal battles and justice. It is in a fighting position or at direct odds with the conjunction. This energy should bring in the cerebral aspects of the battle as strategy and tact. Coming from Libra, Pallas is going to want to see harmony and balance, yet have to fight to make that happen. This aspect is worth paying attention to because as Uranus turns direct and Pallas comes back in its retrograde, the opposition lasts well into April. This energy should continue to build into February for on the 13th of February, Mars will conjunct Uranus and Pallas will be in opposition to both as it stands to turn retrograde. This should amplify the alt-right political people into a situation of just doing what is right or fighting to get people to do what is right.

But that’s not all. Pluto will be square this conjunction throughout 2019. Knowing that Pluto deals with the revelation of secrets and all hidden matters, we have a dissident situation that should fester in the background for a long time. Looking specifically towards the New Moon, Pluto should work in a disciplined way, or in a very controlled and deliberate way, to agitate the explosive, rebellious, deceitful and lawless nature of the right-wing political people around the world.

Sitting in a quincunx position to the conjunction, we find both Venus and Ceres. With Venus, the transit is only a couple days long. With Ceres, it’s a 10 days peaking at the New Moon. What’s fun about this aspect is that it is an aspect of pleasure turning into pain and it’s in a sign that does not like dishonesty, or the revealing of secrets. Well, everything about this aspect is about revealing secrets and fighting for what is known to be just and right. As Venus rolls from Scorpio into Sagittarius, which happens at this New Moon, expect the emotional confusion to really get fired up – if only for a brief period of time during the ingress.

On the Ceres side of the quincunx. We have a very strong feminine energy that is nurturing. This asteroid is in the position of not being able to understand why the right-wing political people are revolting or not being able to understand why the petty – at your throats – type of behavior is happening. This may suggest travel backups at way stations between the 1st through about the 12th of January. This could play out as confusion and delays in travel.

Another aspect that seems to be playing out mostly between the asteroids is the Ceres Juno Opposition. Remember that Ceres is the energy of nurturing and it’s in a sign that honors deep relationships, true friendships and can be passionate and determined. Juno represents the energies regarding how you are faithful or loyal. Juno comes from an earth sign that is sensual, tactile and determined. Yet these two energies are in opposition. Note that the time period for this opposition stretches from mid-December to the start of April (all winter).

Read about Venus, Pallas, Mercury and Jupiter as well as a link to the raw data used as the framework from which the interpretation is made.