Today is the full moon day of August 26, 2018. This is a very powerful full moon. At the time of the full moon this morning a reverse polarity sunspot appeared. This sunspot was strange because its magnetic polarity is reversed. Then a crack opened in the Earth’s magnetic field and solar wind poured in to fuel a strong G3 geomagnetic storm. It is my understandings that reverse polarity is feminine energy. I think this solar event opened us up to a whole new energy. We will see what happens next.

This kind of magnetic energy really affects me. This morning when I woke up my phone did not work. This is typical of that energy because electronics seem to do their own thing when that energy is in effect. My computer also opened up to www.spaceweather.com instead of my email. It looks like I was meant to look at that site before I did anything else. You might want to check out that site for more information on August 26/27. You will also see beautiful emerald green Northern Lights.  They are awesome. 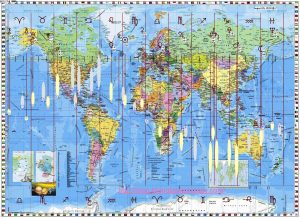 When I looked at the Astrology of the full moon I was amazed. There was a perfect trine between the Sun, Saturn and Uranus. The sun was on three degrees Virgo. This degree means we have invisible help in a time of crisis. Does this mean that it is time for us to have help from our good ET brothers and sisters from space? Is that why there have been so many sightings of UFOs recently? Uranus rules UFOs and it also rules the unexpected so keep your eyes open.

Uranus is the planet of light and it is on two degrees Taurus. The meaning of two degrees Taurus is called an electrical storm. This storm will be able to transform cosmic power and all of our natural existence will change. This storm happened on the Sun last night. Uranus is also the planet of change. We just had a major change in the energy of the sun and the Earth at the time of the full moon.

Two degrees Taurus also means that in back of every self-expression stands the tremendous power of the “Soul Field” which is one of the aspects of the Creative Word that is the origin of this Universe. Now is the time to accept the spiritual potentials of this high celestial destiny. A lot of us have been waiting for years for this frequency change to happen. We have now reached that point in time. After being activated by this electrical energy the pure water of the mountain streams can cleanse everything including us. Look at all the flooding in Hawaii right now.

Then we have Saturn on two degrees Capricorn. This degree means that any individual using this degree of power for their own negative use will lead to their own destruction. The chief who claims power from his tribe in order to lead or save them must deal with the consequences of this power. If in his ambition for power he seeks to be the victorious leader glorified by his people than he will fail.

Right now, there are three planets in Capricorn, which rules governments. They are Mars, Saturn and Pluto.  Saturn is the karmic planet and we have been experiencing much chaos lately, especially in the past couple of years. This means we are about to start a new creation because out of the chaos comes a new way of life. Mars is the energy planet that gets things done and Mars is turning direct now so it is moving into fast speed. This means there will be a lot of events that will happen one right after another.

Here is a video by a Vedic Astrologer called “The Best Day of the Year” referring to September 13 which is also my birthday. This is right after Mars moves into Aquarius on September 11. Here is a link to her video Best Day Ever.

Here is an interesting article by Lisa Brown that talks about this past full moon. 144 Template & Grid – Avatar Consciousness.

Here is another interesting article. Geomagnetic Storm with the Gateway Opening – Here We Glow!

The south node is on four degrees Aquarius right now. This degree means the disciplined use of spiritual energies in restoring the natural harmony disturbed by man’s inharmonic attempts to transcend nature through mind. We need to transform through our heart energy, not our minds.

Neptune is in a trine to Jupiter which is in Scorpio. Neptune rules smoke and we have sure had our share of smoke up and down the West Coast. It has not been fun although I am grateful we are not going through a major earthquake, storm, flood, or a fire event here in Seattle. I think about all the people that are going through major life events right now and I am very grateful that we have only had to deal with smoke, although that can be very harmful to sensitive people.

The energy from Jupiter in Scorpio is bringing up negative events from the past. Scorpio rules sex and that is why so many issues around sexual misconduct are coming out in the open for everyone to see. This also includes all of the Catholic Priests that have been accused of sexual misconduct.  Jupiter moved into Scorpio in October of last year and will move into Sagittarius on November 8, 2018. Sagittarius is a different type of energy. It rules higher consciousness.

We are now in a lot of Earth energy with three planets in Capricorn and the sun is now moving through the Earth sign Virgo. This energy is causing a lot of earthquakes all over the world. This will continue for quite a while because Saturn will be in Capricorn for two more years. The Ring of Fire has been lit-up with quakes for at least a month.  In fact, there has been a large quake over six points almost every day and one of them was off the Oregon Coast.  Large earthquakes almost every day is very unusual.

Hawaii had a fire event with the eruption of one of her volcanos. Now Hawaii is having massive flooding.  Hawaii has been under so much stress because Eris, the Goddess of Chaos is over that area and that is the point on Earth that connects to all of the other planets in our Solar System. Apparently that area needed to be cleansed. My compassion goes out to all those people who experienced trauma because of that event.

We are now in transformation to a higher frequency Earth of love, peace and Unity consciousness.  It is time to manifest love and become peaceful within. Let there be peace in the world and let it begin with me. Shine your light in all its glory. It only takes one little candle to light a dark room. Those who are ready to experience the New Earth will experience a lot of joy and happiness. There is a large celebration coming.   So Be It!