As I write this blog the valley that I live in, in West Yorkshire UK, is in devastation after Boxing Day floods and on the News last night I see that tornadoes and floods have also affected the USA this season. With the planets all direct from Christmas Day until early January it is an amazing time to set our intentions for the year. It seems that the over riding patterns of the last few years, of learning to stay centered in chaos, are if anything intensifying so here is a creative challenge for 2016: Creating wormholes to higher dimensions and solving our problems on higher levels of consciousness.

I hope as you read it you mind is already spinning with possibilities. This realization that we are able to consciously create wormholes has arrived in my head with stunning clarity amidst the chaos of Christmas but following a most blissful Winter Solstice. Those who read my last blog will be aware that a group of us were visiting the Sacred Isle of Anglesey, Wales to experience the sun entering the womb of the Goddess at the cairn Bryn Celli Dhu built 4000 years ago by the Druids. Our theme was to heal karma between the Celtic and Roman peoples which also is interwoven with the polarity between Paganism and Christianity which has dominated both cultures for the last 2000 years. One thing clear doing this work is that as human beings when we try to solve problems in the third dimension the powerful forces of karma and hostile governments tend to overcome us; it’s a matter of one step forward and two steps back.

Darshana ‘Elohim of Ligh’ has joined us from Italy along with her friend and interpreter Elisabetta Invernizzi, an amazing healer too. Spending a few days in their company has already propelled us into another dimension before we even go to the sacred sites. Darshana has been channeling a system called EOS® (Holographic Systemic Energy) since 2004 and in 2012 this has been available to humanity through an attunement process, similar to Reiki and Sekhem. A few hours before we are due to witness the Sun entering the cairn of Bryn Celli Dhu at the Solstice sunset there is a gale of 70 miles an hour blowing and the rain is thrashing down. Elisabetta offers me an EOS healing in the hotel so we shut the curtains and proceed. During the treatment, which has its own special energized music, I become the land, my blood rivers with birds and frogs living within me; it is pure bliss where my sense of separation with nature has completely dissolved. After an hour we open the curtains to find blue skies and no gale, we are delighted and set off at full speed to the cairn.

There is a ceremonial pathway along a river to the cairn and there are very deep puddles so in an unusual situation I find myself offering piggy backs across it as the only one wearing wellies. I feel a bit like the Fairy Queen Rhiannon who carried people on her back like a donkey. When we arrive in the cairn the sun is already shining into the tunnel and I can’t really adequately describe the experience of bliss that we experience. I took some photos which show a Flower of Light forming around the triangular entrance way facing 230 degrees West as we spontaneously toned. 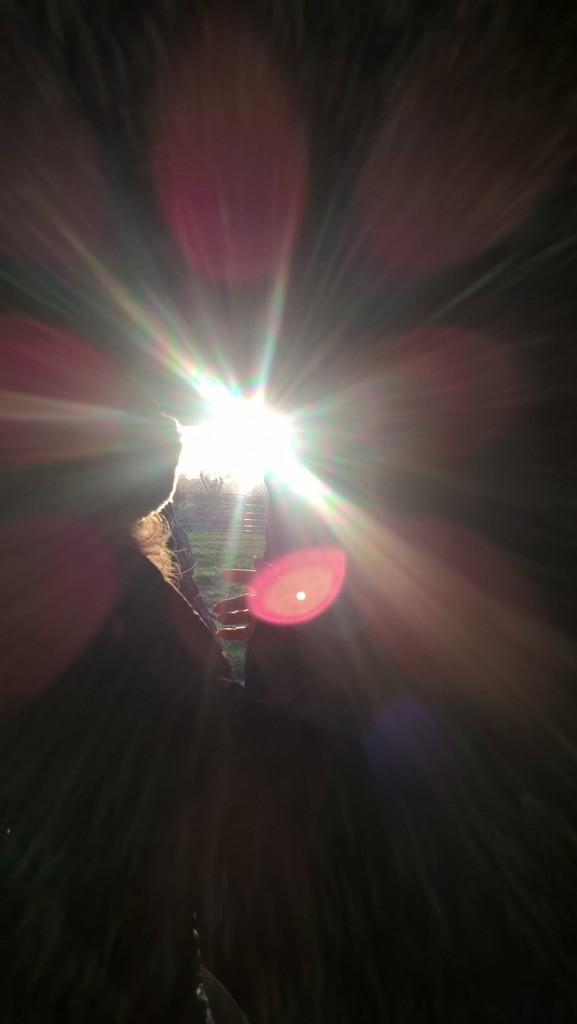 After half an hour the Sun reaches all the way into the ‘vaginal’ tunnel facing East 55 degrees creating vivid gold patterns on the rock walls filled with quartz inclusions. We greet the arrival of the Spirit of Christos at this special time, the rebirth of the light.  At this point a young, handsome Italian man joins us briefly and then leaves again…..another miracle. 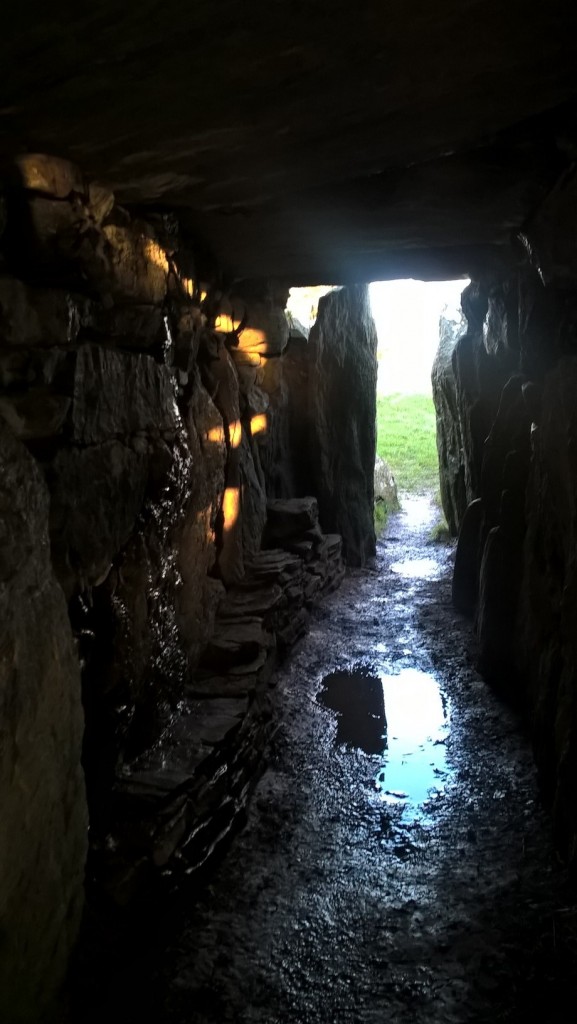 In the space of a day we have attended a Christmas Carol Service at the candlelit church by the sea, Llanedwen church where in the 4th Century St Edwen lived with a group of nuns. The church triangulates in the landscape with Bryn Celli Dhu and a number of other cairns along the Menai Straits.  Now just hours later we are experiencing the most powerful Druidic ceremony I have ever been part of…..and I have been part of many! The Return of Christ and the Sun entering the Womb of the Goddess to fertilize the Awakening Rainbow Seed.

I have been aware of the ‘Wormhole’ experience for the last year and particularly in group meditations in the Quantum Field work I have been doing with neuroscientist and healer Dr Jen Altman. This experience in the cairn however takes it to a whole new level, the possibilities of the beauty and light that are available to us from the level of sacred geometry and sound. So how can we consciously start working the wormholes?

New scientific breakthroughs show how Wormholes and Entanglement Theory are inter connected and thanks to a copy of New Scientist arriving with the referenced article on Jen’s front step the day after we did Entanglement Theory on our course I can hopefully articulate this with clarity…so thank you to the forces that brought it and all the people it journeyed through along the way.

A Wormhole is composed of ‘dark matter’ a mysterious substance which has gravitational properties and without it galaxies would not be held together in the way they are. A Wormhole also has communicating particles at each end of it. Entanglement Theory proved that particles in different dimensions and time, space realities can affect each other simultaneously……in other words even faster than the speed of light. If however the particles at each end of the Wormhole stop communicating we get half a Wormhole. The very good news is that it has also been proved that consciousness affects particles too and so using our minds, bodies and voices we can call Wormholes too us allowing communication channels between earth and higher dimensions to be clearer.

My intuitive feeling is that Wormhole particles love celebrations and ceremonies and are especially powerful at certain parts of the planet in places of beauty. These places exist everywhere and can be felt through our senses. Singing and dancing are especially pleasing to the ‘Worms’ and they bend towards us to feel the special vibes of Joy we give out when we are being happy, loving human beings. Perhaps Joy is the ‘chocolate’ of Cosmic Worms. 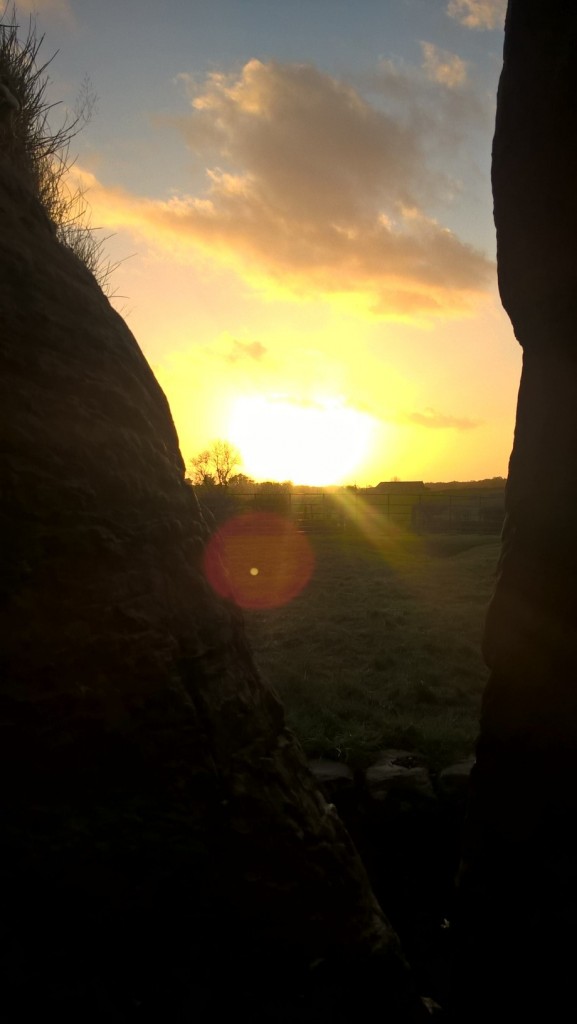 Returning to the photo of the light entering the Cairn you will notice an Orb of Light which appeared 3 times during that day visible on photographs and had appeared to Darshana at home proceeding this. As soon as I saw the Orb of Light it made me think of the powerful teaching I had had on Anglesey in the summer on a day I was reading about String Theory. On this particular day I walked to a place I call the Druids Harbour, a natural inlet and a place of the most beautiful energy. With the tide in I noticed the first Jellyfish pulsing gently beneath the water, like a small stone dropping into the water sending out concentric circles. As my eyes tuned in I started to notice there were hundreds of jellyfish all slowly pulsing and then I started to see they were all in sync with each other. I was transfixed and felt in every cell of my body that this is the way light pulsates through 11 dimensions or more in strange colors we don’t see on Earth. The teaching of the Cosmic Jellyfish was to bring this feeling of pulsation into our cellular membranes and this will bring us into more powerful synchronicity with the universe.

On my return home from Anglesey I found this beautiful Buddhist video The Great Bell Chant on my Facebook timeline which really sums up beautifully everything experienced through the Winter Solstice. It was made 7 years ago but I feel that Child in the Lotus Flower awakening right now. https://vimeo.com/6518109

I offer chart readings and am particularly interested in doing Progressed Solar Return charts this year as they reflect where you are right now beyond your karma so I am doing a special offer on these until April 2015. I am also teaching an Astro Shamanism course star travelling beginning 22nd January on Friday mornings in West Yorkshire, UK.

Darshana will be visiting the UK in April offering attunements to EOS® and is visiting Mount Shasta, USA in September 2016.  Please get in touch at astroalison@gmail.com for information about any of the above. Darshana’s web site where you can find out more about her work is www.eos-holographic-systemic-energy.com and part of the web site is English.