The Venus/Jupiter conjunction on June 30th /July 1st opened a doorway to abundance. I have felt that energy in my life and it feels good. I actually felt it open on Sunday June 28th. It felt like a whole new energy had just opened up. Now we have this upcoming New Moon on July 15, 2015. This is going to be a major New Moon. This is when Mars will be opposing Pluto exactly on 14 degrees Cancer/Capricorn. These two power-planets will be in exact opposition to each other. I think they are the two most powerful planets in our Solar System.

Mars has always been considered the War/violent planet, and Pluto is considered the hidden God of the Underworld. For years there have been several wars going on in our heavens and on Earth. There have been banking wars, computer wars, weather wars, drug wars, and physical wars. The banking wars and the computer wars have been played out on the 4D Earth. The weather wars, drug wars, and the physical wars have been played out on 3D earth.

Now we are coming to the culmination of these wars, especially the financial war. This New Moon will be the turning point. Greece just reached a desperately needed deal with the Eurozone in a historic agreement to prevent Greece from crashing out of the European single currency, and I just heard that a deal with Iran was imminent. This is all good. The Asian Infrastructure Investment Bank (AIIB) formally came online the end of June. The headquarters of this new bank will be in Beijing, China. The related New Development Bank (NDB) is also making the news brics-summit-putin-russia-sco-currency.

By longitude, Mars will be exactly over Washington, D.C. on this New Moon, and Pluto will be over Hong Kong. What is going on in Hong Kong right now? Didn’t they just have a Stock Market crash? What effect will this crash have on China? What is going on behind the scenes between China and the Federal Reserve Bank in Washington D.C.? What will be the outcome of this final power struggle that has been going on for so long? The Mars/Pluto energy also causes fires, explosions, and volcanic eruptions. The Mercury conjunct Mars energy will cause storms and accidents.

The Blood Moon that occurred April 15, 2014 was the first Blood Moon of the series of four. September 27/28 will be the last Blood Moon of the series and this is one of the reasons why September will be so important this year. In the Jewish prophecies it is the end of the Shemitah year. The financial system goes through a financial reset every 7 years and at the end of 49 years there is a year of celebration. Well, from September of this year until September of next year it will be the year of Jubilee, or a year of celebration.

The Pope will meet with President Obama on September 23, 2015 on the Day of Yom Kippur (judgment day). According to Astrology the Sun will be conjunct the north node on that day, and this starts a whole new cycle. On September 27 Venus will be on 22 degrees Leo. This is the degree where the conjunction of Venus and Jupiter happened on the full moon of July 1, 2015. This means that energy will be activated again. This will be the beginning of a whole New World.

A video of Astana, Kazakhstan was brought to my attention that I wanted to share A New Masonic Capital. I tried searching for a list of the seventeen religious denominations, but nothing comes up. Please see 5:25-5:30 into this video (https://www.youtube.com/watch?v=Jv64nB40CKg). Here is a picture. 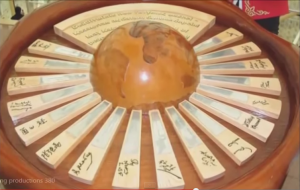 Here is another video from Jonathan Newell.

In the meantime it is very important to watch your thoughts. As the Shuman resonance goes higher and higher, what you think will happen instantly, and this is why it is so important to watch what you think. What you think and feel is what you will create, so please release your negative emotions quickly. Live in the vibration of love. The energy wave that is coming in this summer, especially in September, will change everything. This will cause the great awakening. Choose love, and everything is going to be OK!     So Be It!