Seven of us heard the call to go to the Orkney Islands to witness the Total Solar Eclipse from the oldest and one of the largest Neolithic sites in Britain dating to 5000BC. The Stones of Stenness is where our journey began calling the Ancient Animal guardians of Britain; Cernunnos the Great Stag in the East, Epona the White Horse in the South, Mona the Sacred Cow from the Isle of Angelsey in the West and Artor the Bear in the North. 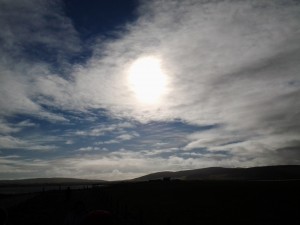 Stenness is a Solar temple and once had 12 stones so the passage of the Sun around the zodiac could be observed. We also had been gifted Tibetan prayer flags and a Tibetan spinning gong and we had Kushi wind chimes attuned to the elements which I must say the numerous faery folk of Orkney loved very much. 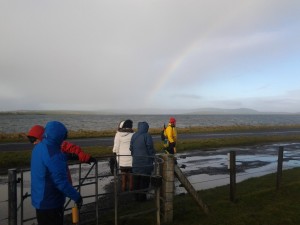 Just as we arrived at Stenness at 8 am it was bucketing down, however soon a lovely blue ring of sky opened up above us. We set off along the ancient pathway to the Ring of Brodgar. The Lunar Temple was one mile away across this wild landscape on thin litmus of land with the Lochs of Harray and Stenness on each side. At the narrowest part of the road, which felt very much a threshold between our world and the underworld, we were amazed as a full rainbow formed arching right across our path. It has been shown by archeological remains that this pathway was used traditionally to journey into the underworld so we felt right on track.

We noticed a swan mother and father with seven cygnets. I felt this was highly significant as the swan symbolizes the ‘sacred marriage’ as does an eclipse of the Sun and Moon. The Child of the Sun and Moon is the Philosophers Stone which is what we all are in this new cycle. Also in Celtic mythology the Seven Faery Children of Lir appear as swans and they are the power animal that helps humans enter other dimensions.

The cygnets were behaving in an interesting way too. Three were happily hanging out with mum and dad, two were making their way into the open sea on the other side of the bridge and one was swimming up and down very interested in us! The swans also made me think of the archetypal story of the ‘ugly duckling’. This was exciting as nature was confirming my own intuitive feeling that those in our group needed to be totally affirmed and loved by Mother Moon and Father Sun in this new cycle and leave any baggage behind. 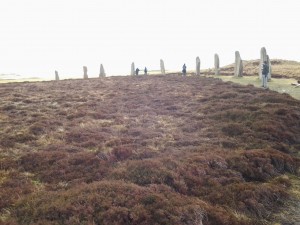 As we walked along moving softly with the wind behind us we could see the eclipse slowly making its way towards totality. Up ahead we could then start to see the enormous Ring of Broghar a lunar temple which once had 60 stones and now has 27. There were some other people there who had come by car. The eclipse was perfectly aligned with the path between Stenness and Broghar which was also very exciting.

We entered in this traditional way from the East rather than from the car park and so we were oblivious to the many cordons preventing people going to the center of the circle. This felt a natural place for us to be and where we went to download the power of the eclipse and send it across the world with our spinning gong and Tibetan prayer flags and the authorities left us in peace to do this. 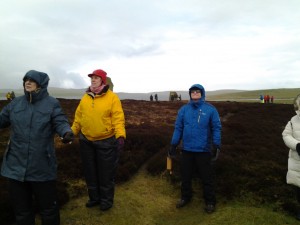 I will mention too that an American woman from near Yellowstone National Park joined us and at one point somebody took a photo of us back to back between two very powerful stones and said ‘ you look like an eclipse’. It did feel that the energies of both Britain and America were important with this eclipse, perhaps bringing the winds of change for both countries. Speaking of winds, the solar winds were also very high bringing viewings of the Northern Lights across Scotland over the eclipse period.

In the days that followed we explored the Neolithic sites left by the giant, red headed people who once lived here and knew this Scotland to be a key power place on the planet as it predates all other sites around the world and Stonehenge. At the time these sites were abandoned, the pyramids started to be built in Egypt and there are many connections, not least that both sites may be aligned to Orion. The Ness of Broghar, an archeological site partly funded by Friends from America, is uncovering an incredible temple complex including a pyramid in this area. They have a Facebook page. 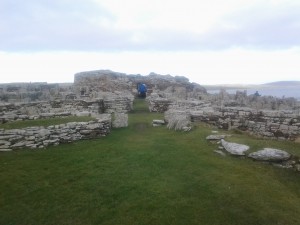 We visited Skara Brae and Brock of Gurness, spiraling stone homesteads almost within the earth and were inspired by how these people lived so harmoniously with nature. At the breath taking cliffs of the ‘Tomb of the Eagles’ we went inside the tomb where our auras magnified as shown by the photos. We saw there among the treasures of human, eagle and mineral artifacts, a newspaper article of a skull found with an elongated crown resembling Egyptian kings and queens. We were left in no doubt as to the origin of the Star Beings that once lived here.

We were all very aware of the karmic issues the Star people brought to earth, on the negative side the misuse of sexual power and problems surrounding the use of metal, especially as money. The eclipse coincided with the final Uranus Pluto square and the continuing exposure of misuses of power (Pluto in Capricorn) and a news story broke on March 16th as various ex British cabinet ministers were arrested and charged for being part of an extensive pedophile ring. This case will expose the corrupt heart of the establishment and in our prayers we asked for the noble and courageous heart to arise in humanity, and for new leaders to replace those who have misused their power, in the most appalling way, and those in the police and other organizations who helped to cover it up to be exposed too.

On the cliffs of the Tomb of Eagles we did some ‘Eagle’ yoga and felt like we were literally  being picked up by the wind and soaring. Disapproval of ourselves generated by others who can’t recognize our beauty and talents can be very disempowering. My feeling is that the theme of the ‘ugly duckling’ transforming to the powerful Eagle is an important key to unlocking humanity’s potential at this time.

Our ancestors reminded us of how their homes, agriculture and lives were intimately woven into cosmic cycles and that there is great wisdom in working with nature rather than against her. The Orkneys are a magical time tardis where people can reconnect to primal energies of a vision which began thousands of years ago and was reborn at the Spring Equinox 2015.

Thanks to the Planet Alert blog some very important connections were made. Two people came on the trip after reading the blog and it turns out they were born one day after each other. The woman F was born Dark Moon in Aries and the man T was born New Moon Aries in 1956 so as they pointed out they were a Yin and a Yang from opposite sides of the country.

Also we connected with a mandala artist M near Glastonbury who took a group to White Sheet Hill crop circle formed in 2010 following a lunar eclipse close to the equinox.  This is a link to a photo of this awesome crop circle. http://www.lucypringle.co.uk/photos/2010/mere-cropcircle-2010.shtml

People connected to the Orkneys across the world which was great, a swarm of global bees drawn to wherever we needed to BEE…….and happy to BEE who we are.

If you want to get deeper into your chart contact me about a Goddess asteroid and Centaur reading on CD. If you live in the North West UK we have regular groups and workshops. Contact me at astroalison@gmail.com for more information.

Our next journey exploring the sacred sites connected to the red headed giants will be by yacht in Tenerife and La Gomera September 2015 to download the final Blood Moon eclipse and to spend lots of time with the whales who migrate and live in this special Atlantic corridor.  There are many who believe La Gomera, which is a strange misty Jurassic age forest, may have been part of Atlantis and it is where Columbus set off from to discover America which I’m sure karmically is going to turn out to be very important. The indigenous people of these two islands are called Guanches, very tall red headed people. 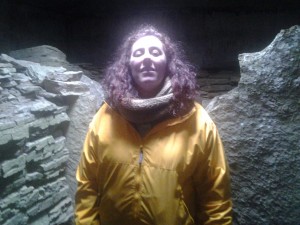