My friend Krsanna who has the TimeStar website decoded the crop circle made on may 3rd 2010. This is what she has to say:

For your viewing pleasure a diamond ring effect will be visible during the total solar eclipse on July 11, 2010.  At the same time Earth’s sun will eclipse Sirius A and B.  This will be the first time in 50 years  Sirius A and B meet for a handshake in their respective orbits.  On Earth we are embraced and held tight in our star’s magnetic field while it orbits the galaxy in the company of stars that keep count of the ages, the stellar timekeepers for earth’s ancient traditions.  Sirius will not be visible to the naked eye during the eclipse.  It will make its annual heliacal rising on August 7, 2010, but it is always in its predictable orbital relationship with our star.

“The diamond ring effect is a feature of total solar eclipses. Just before the sun disappears or just after it emerges from behind the moon, the rugged lunar limb topography allows beads of sunlight to shine through. This effect is called Baily’s beads, in honor of Francis Baily who first noted the phenomenon in 1836.”  http://en.wikipedia.org/wiki/Diamond_ring_effect

The Old Sarum crop circle in Wiltshire (England) reported May 3, 2010, illustrates two eclipses — Sirius A and B and Earth’s sun in total eclipse as viewed from the Earth in the astrological sign of Cancer.  Seven stars are conjunct in the sign of Cancer on July 11, 2010.  Symbols in the Old Sarum crop circle serve to illustrate the eclipses in Cancer and may also correspond with other interpretations.  Crop circle symbolism is so archetypal that more than one interpretation may apply to any formation. 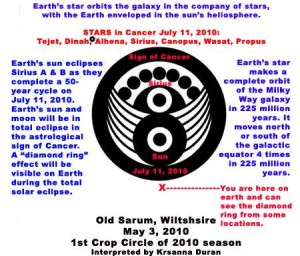